Why Art is good for our health 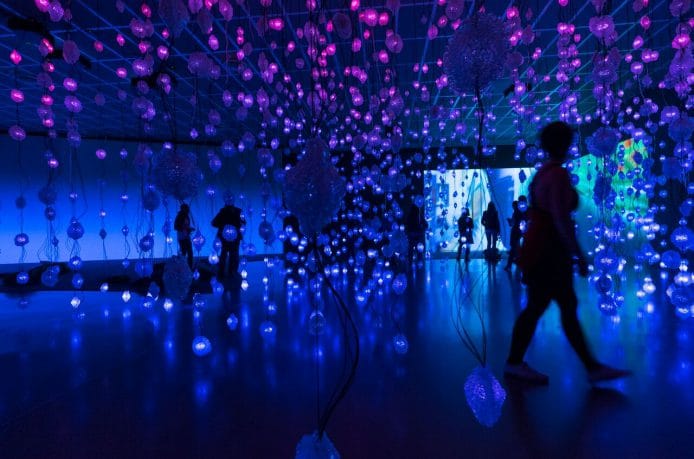 The French novelist and critic Stendhal was visiting Florence in 1817 when he was overcome by the beauty of its art. “I was in a sort of ecstasy…absorbed in the contemplation of sublime beauty,” Stendhal wrote. “I reached the point where one encounters celestial sensations … Everything spoke so vividly to my soul. I had palpitations of the heart, what in Berlin they call ‘nerves’. Life was drained from me. I walked with the fear of falling.” Named after the 19th-century writer who became physically ill from imbibing too much art, Stendhal Syndrome is a psychosomatic disorder that causes elevated heartbeat, fainting and even hallucinations. It’s over 200 years since Stendhal was overcome in Italy, however the power of art to evoke emotional – even physical – reactions is as strong as ever, particularly in COVID-19 times.

“Encounters with art are like an accumulative shift of the brain,” says Artspace executive director and curator for Australia’s representation at the 2021 Venice Biennale Alexie Glass-Kantor. “They allow us to experience the world as other people feel it and expand our way of seeing and feeling. There is a potential for transformation and something profound and unexpected to occur.” The sentiments of Glass were echoed in a feature in May in The Sydney Morning Herald titled “Return to the sanctuary” that explored the feeling of being overcome by artworks of great beauty as galleries began opening their doors after the coronavirus lockdown. “Some people do have a physical reaction to art,” art historian and lecturer Lorraine Kypiotis told the SMH. “With people hankering to have galleries open again, many people will recall this feeling of being overwhelmed by a sense of an artwork’s beauty.”

Stendhal Syndrome is the most extreme example of the emotional and physical transformation people can experience when being exposed to objects or phenomena of profound beauty, highlighting the power of art to touch our lives in profound ways. While Stendhal described his experience as a negative one in his book Naples and Florence: A Journey from Milan to Reggio, today the ability of art to generate psychological responses is used for good, with commentators increasingly identifying its mental, emotional and physical benefits for both artists and viewers.

In his 2013 book Art as Therapy, philosopher Alain de Botton argues that art can help us with our most intimate and ordinary dilemmas, asking: ‘What can I do about the difficulties in my relationships? Why is my work not more satisfying? Why do other people seem to have a more glamorous life? Why is politics so depressing?’ His contention is that certain artworks can provide powerful solutions to our problems, as tools for the resolution of difficult issues and to gain a greater sense of clarity and serenity in daily life. Botton’s belief that art has a powerful psychological and physical function echoes that of Walter Benjamin, who identified an indefinable “aura” that occurs in the experience of standing in front of a work of art in his influential essay The Work of Art in the Age of Mechanical Reproduction.

That essay followed the musings of Anais Nin and Tolstoy, with the latter identifying the purpose of art as to provide a bridge of empathy between us and others (“A real work of art destroys, in the consciousness of the receiver, the separation between himself and the artist.”). For Nin art was a way to exorcise our emotional excess (“Something is always born of excess: great art was born of great terrors, great loneliness, great inhibitions, instabilities, and it always balances them”) and, today, art is used in many different ways as a channel to explore our psychology that lets us both understand and exorcise our emotions – in other words, a form of therapy.

Take the Museum of Contemporary Art’s Artful: Art and Dementia research project, which over three years (2015-2018) worked to improve the wellbeing of people living with the condition. It was conducted in collaboration with the Brain and Mind Centre, University of Sydney and Dementia Australia, and investigated exactly how contemporary art could enhance the lives of people with dementia, and perhaps even promote positive changes in their brains. A total of 16 programs with 112 participants were run, with groups of six to eight  people and their carers visiting the MCA fortnightly for five sessions over a 10-week period. Each time, the program participants visited its galleries with artist educators and took part in art making activities. The gallery experience in particular brought out surprising new interactions, such as when – in response to Pipilotti Rist’s Pixelwald Motherboard work – an entire group started spontaneously dancing. Professor Sharon Naismith and her team at the Brain and Mind Centre conducted 50 pre- and post-interviews with Artful participants across the three years, and after experiencing a rich range of art across mediums spanning painting, video, sculpture, installation and sound the study concluded that: “For many, it opened up a whole new world; an opportunity for participants to enjoy themselves, move their bodies and find new ways to communicate.”

Art as therapy was also explored in The clinical effectiveness and current practice of art therapy for trauma, a 2018 joint research paper by WorkSafe, the Transport Accident Commission and Monash University published by the Institute for Safety, Compensation and Recovery Research. After canvassing nine recent studies and six reviews of the clinical effectiveness of art as therapy, the paper concluded: “There is moderate evidence that art therapy can significantly reduce depression and anxiety symptoms associated with psychological trauma.” In the same year the Sydney Anxiety Clinic published The Benefits of Art Therapy for Children: a research paper examining how art therapy could help children with conditions including personality and speech disorders, childhood trauma, abuse, deprivation and grief. “Art making can provide individuals with the opportunity to express themselves in creative and non-linear ways, which can deepen the client’s experience of the self, offering potential for insight and ultimately personal healing,” the study ultimately found.

Artists themselves have long understood the therapeutic powers of their practice, from Vincent Van Gogh (suspected to have experienced bipolar disorder, with much of his artwork reflecting emotional pain) to Frida Kahlo (who, after a devastating bus accident, used her work to depict her psychological pain and immobility). In Australia Ben Quilty has explored the psychological impact of war on soldiers, civilians and children, after the artist visited Afghanistan to talk with and paint those who had experienced conflict and human suffering there. He also journeyed to Europe to work with refugee children in Lebanon, Greece and Serbia and taught Bali 9 member Myuran Sukumaran to paint in Kerobokan jail, campaigning in vain to save him from being executed. “My work is about working out how to live in this world, it’s about compassion and empathy but also anger and resistance,” Quilty told InDaily Adelaide Independent News.

The wonderful thing about art therapy is that you don’t have to consider yourself an artist to enjoy its benefits. Art therapy is broadly defined as a therapeutic process in which a person can freely engage in creative processes while exploring their emotions, reconciling conflicts and fostering self-awareness, and can range from sculpting and painting to drawing, ceramics and more.

The neighbourhood around The Office Space is alive with people enjoying the pure and positive catharsis that art can provide, thanks to the popularity of programs such as Cork & Canvas in Darlinghurst, which offers group painting classes over drinks and nibbles, and The Pottery Shed in Surry Hills, where people flock for tactile and soothing hands-on sessions to learn how to wheel-throw pottery. Closer to home, the walls of The Office Space hold a significant art collection including works by Del Kathryn Barton, Brett Whiteley, Richard Larter and Peter Toomey, for stimulation and contemplation of tenants and visitors. “The art works make our space unique; it imbues it with personality and pleasure,” says The Office Space co-founder Naomi Tosic. You can take a virtual tour via the Guide article this month.

Following intensive lobbying from all quarters, the Federal Government recently announced a $250 million Arts and Entertainment stimulus package to provide a much-needed boost to a sector that has suffered enormously during the Covid-19 crisis. The funding is a much-needed boost to the sector and will extend beyond professional artists to those in supporting roles. “This package is as much about supporting the tradies who build stage sets or computer specialists who create the latest special effects, as it is about supporting actors and performers in major productions,” Prime Minister Scott Morrison said in a statement.  Arts Minister Paul Fletcher promised the package would not only deliver jobs but provide all Australians with more creative and cultural experiences across the arts.

As the population attempts to rebuild and restore, it seems certain we would all benefit from a little more art as therapy.