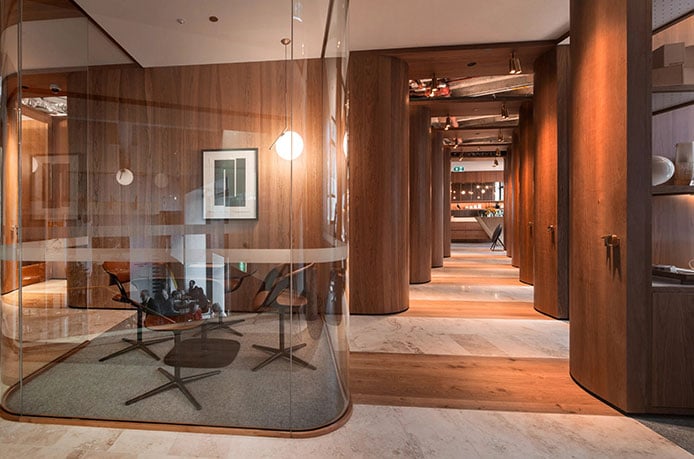 The Office Space is well known for creating beautiful, aspirational offices, incorporating new forward-thinking working environments, exceptional services and facilities. What many people don’t realise is that the spaces house an enviable art collection, rarely experienced outside the executive floors of the country’s biggest institutions and corporations.

The walls of Paramount by The Office Space in Surry Hills feature works by local and international artists, working across the 20th century and now. Here, art and design have been introduced not as an afterthought: it is central to the interior ambience and energy – a nod to the building’s past and its creative soul – while heralding a new era of enlivenment and inspiration.

While the collection is enjoyed daily by Office Space clients, staff and guests, visitors are also welcome. You can contact our concierge to book a viewing.

Meanwhile, here’s a walk-through of the collection to whet your appetite. 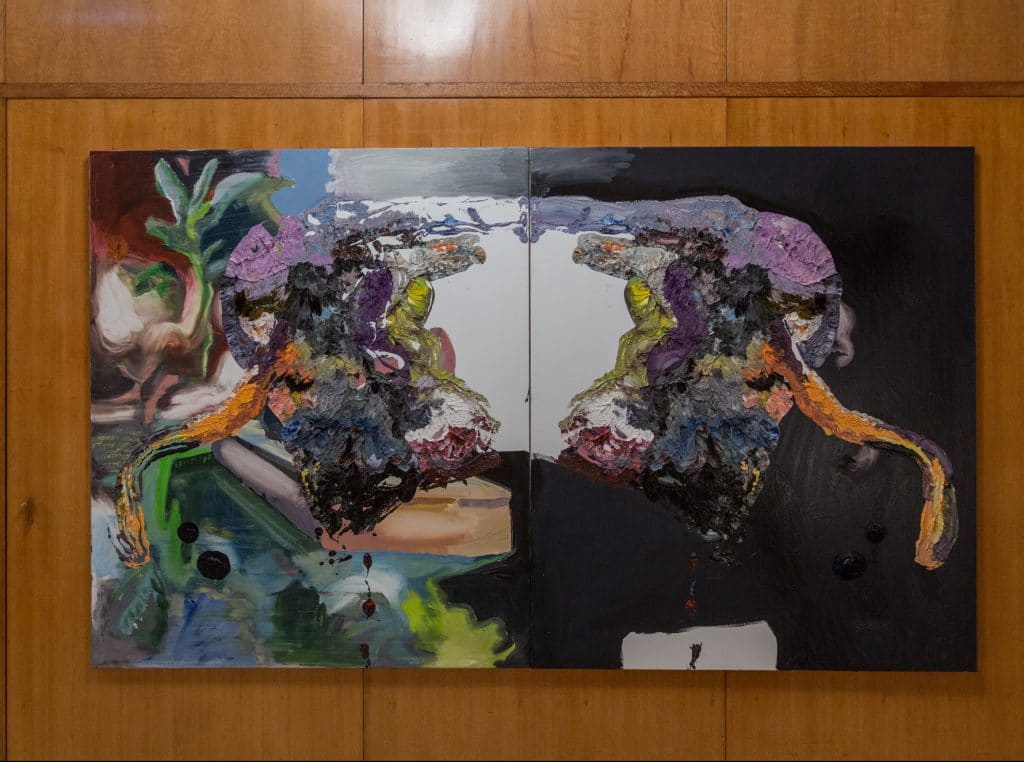 Corita Kent, or Sister Mary Corita Kent, (born 1918 in Fort Dodge, Iowa) was an American Catholic nun, an artist, an activist and an educator working in Los Angeles, and later in Boston.

The 11 pieces currently on display as a part of the Paramount by The Office Space collection were all painted between 1965 and 1973. These vibrant serigraphs represent Kent’s spirituality but interestingly her commitment to social justice, her hope for peace and a general delight in the world around her. Built up from popular culture, the works use grocery store signage, texts from scripture, song lyrics and writing from literary greats such as Gertrude Stein, E.E. Cummings and Albert Camus.

In 1968, Kent decided to devote herself entirely to making art, leaving the Order and moving to Boston’s Black Bay. She made numerous commissioned works and continued to create over 400 of her own serigraphs for nearly two decades. The artist lived in Boston until she died in 1986. 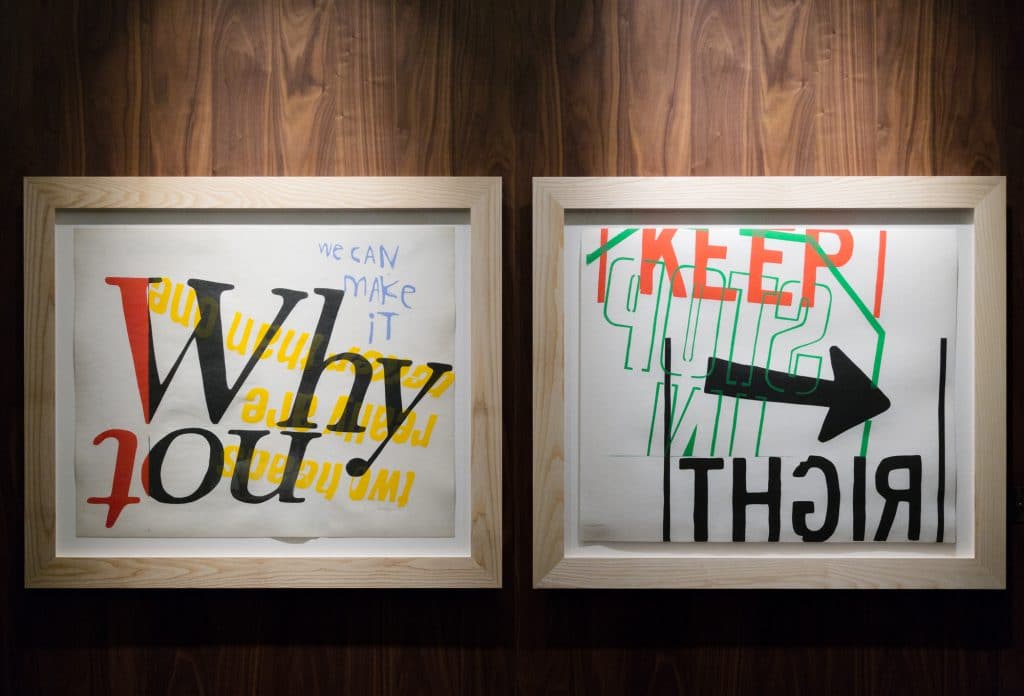 David Manley (born Sydney) is an emerging local talent in the realm of photography. Manley studied at the College of Fine Arts at UNSW, majoring in photo media and graduating with Honours in 2011. He was the winner of the coveted Head on Portrait Prize in 2012.

Taken from a series entitled ‘Ambivalent Structures’, the photographs featured at Paramount by The Office Space are an exploration of Cold War architectural remnants, captured in a post-brutalist urban terrain. Military bunker facilities have long been a subject of interest for artists and architects alike, particularly since the closure of the Cold War. These images possess a silent striking strength – revealing the powerful psychological effect of architecture. 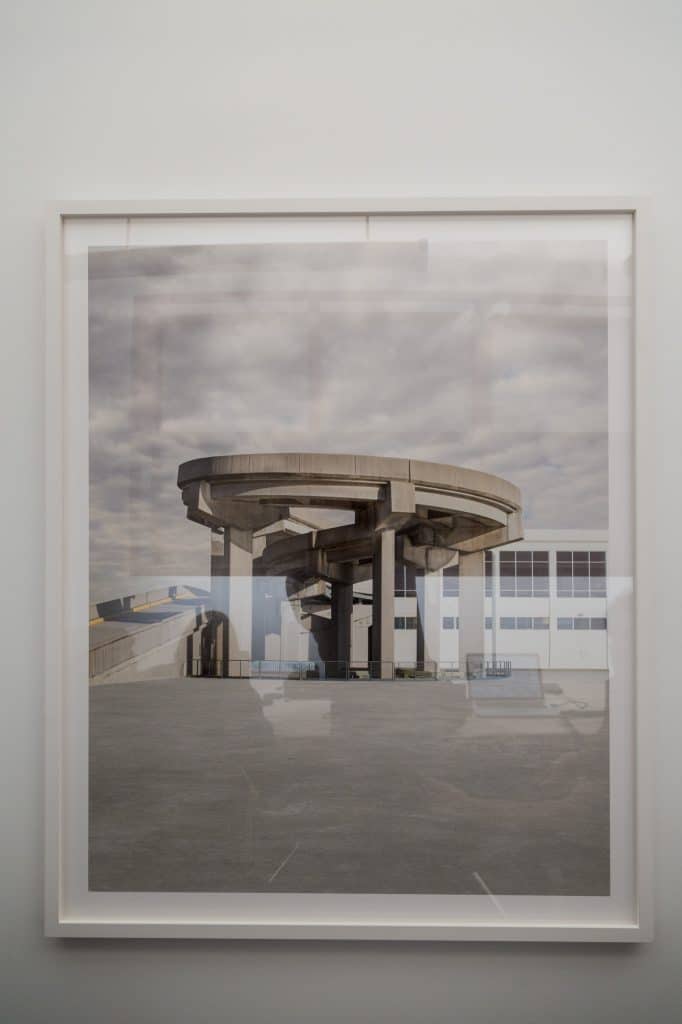 Julije Knifer (born 1924 in Osijeck, Croatia) is recognised as one of the most prominent Croatian painters of the 20th Century. He studied at the Academy of Fine Arts in Prague, and was the founding member of the 1960s Croatian avant-garde art collective known as the Gorgona group in Zagreb.

Knifer’s oeuvre involves the exploration of a single form entitled ‘the meander’. The meander is a geometric, maze-like form composed of only horizontal and vertical lines, appearing almost exclusively in black and white. Knifer began creating the meander in 1960 in various painting techniques such as print, oil, acrylic paint, collage and mural. Its repetition across his entire career addresses the artistic problem of capturing time. Three pieces from this life-long series feature in the Paramount by The Office Space collection.

Laëtitia Badaut Haussmann (born 1980, Paris) graduated from the École nationale supérieure d’arts of Cergy in 2006, and took part in the renowned Paris triennale, La Force de l’Art in the same year. Her practice is gently fragmented, encompassing several fields. With the help of sculpture, video, photography, and text, she produces stories, fictional or documentary, private or holistic, in a movement that brings together macrocosm and microcosm, through interplay of correspondences and references.

Drawn from a larger selection, the photographs appearing at Paramount by The Office Space originate from a collection of interiors magazine Maisons Françaises, dating from 1971 to 1989, and kept by Haussman’s grandmother. The artist tore away advertisements, converted them to black and white and removed any trace of text or symbol that might have revealed their original commercial purpose. The result is on one level a decorative image but exists on another as an exercise in uncovering and discovering objects.

Noah Taylor (born 1969 in London) is best recognised for his work as an actor, perhaps most famously for his role in The Year My Voice Broke or as Danny in the 2001 cult classic, He Died With a Felafel in his Hand. While he has been producing music and painting from an early age, he only began exhibiting his artwork very recently. Taylor now lives and works on the south coast of England with his family.

Taylor’s paintings are of lonely isolated figures in ambiguous settings. Australian musician Nick Cave has said, “Noah Taylor’s portraits stare back at us and we can’t help but be touched by their strange, blank beauty.” All of Taylor’s paintings are untitled, as he prefers to allow his viewer to read into the image in their own way. 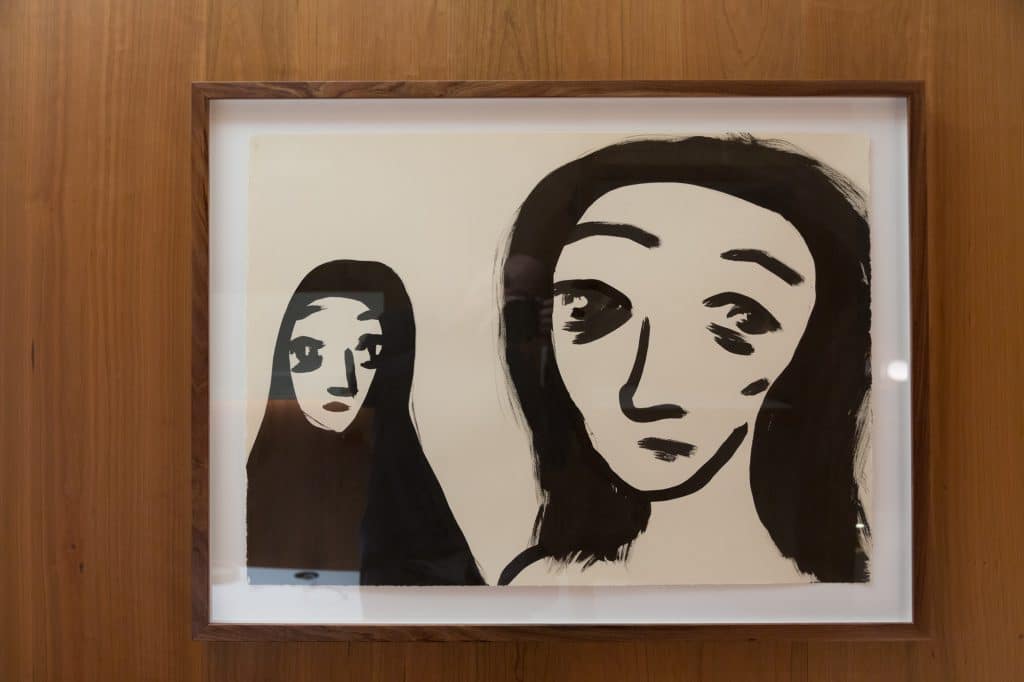 Paul Ryan (born 1964 in Auckland, NZ) arrived in Australia in 1973. He has been an Archibald Prize finalist 11 times, most recently in 2014 with his portrait of Australian actor Richard Roxburgh. While his portraiture explores ideas and images of early colonial men and wild colonial boys, his landscapes capture the raw green beauty of the NSW south coast, where he now lives with his family.

The ping-pong paddles featured as a part of the Paramount by The Office Space collection show Ryan’s signature caked and carved painting style. American musician Bill Callahan has featured Ryan’s work on his album covers, and in 2015 projected a selection of paintings as a stage backdrop for his performance at the Sydney Opera House.

List of works in our collection: Ping pong landscape diptych 2, 2014 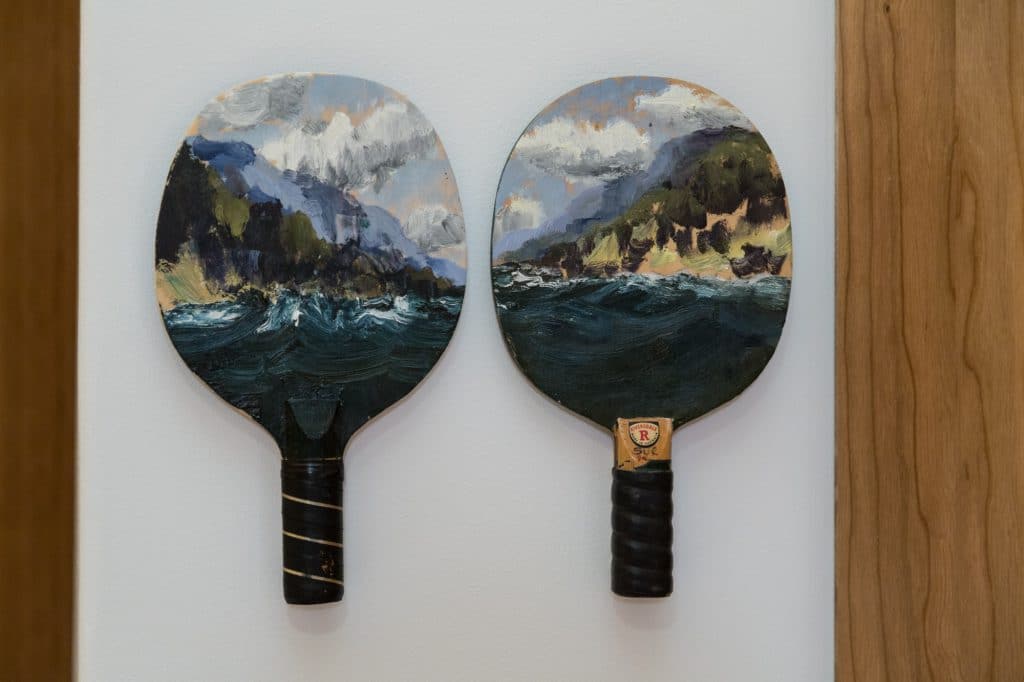 Richard Larter (born 1929 in London) is one of Australia’s best recognised pop artists. As is the case with many pop artists, Larter was fascinated by high and low culture, from art in museums to everyday popular culture. Using hypodermic syringes to create some pieces, his bold style and unusual techniques borderlined the abstract and challenged perceived boundaries between high and low art.

Larter’s works included images of popular icons like Marilyn Monroe, Sophia Loren and Mick Jagger, along with numerous friends he admired. By far his most beloved model was his wife Pat Larter, whose uninhibited, vibrant persona brought great vitality to his works across all media – paintings, prints, films, collages and tapestries. The artist passed away in Canberra in 2014.

The works featured at Paramount by The Office Space include both sculpture and painting. There is a clear dialogue between the surfaces and shapes in each piece, with one informing the other in a constant play. These works offer a wonderful sense of joy de vivre. 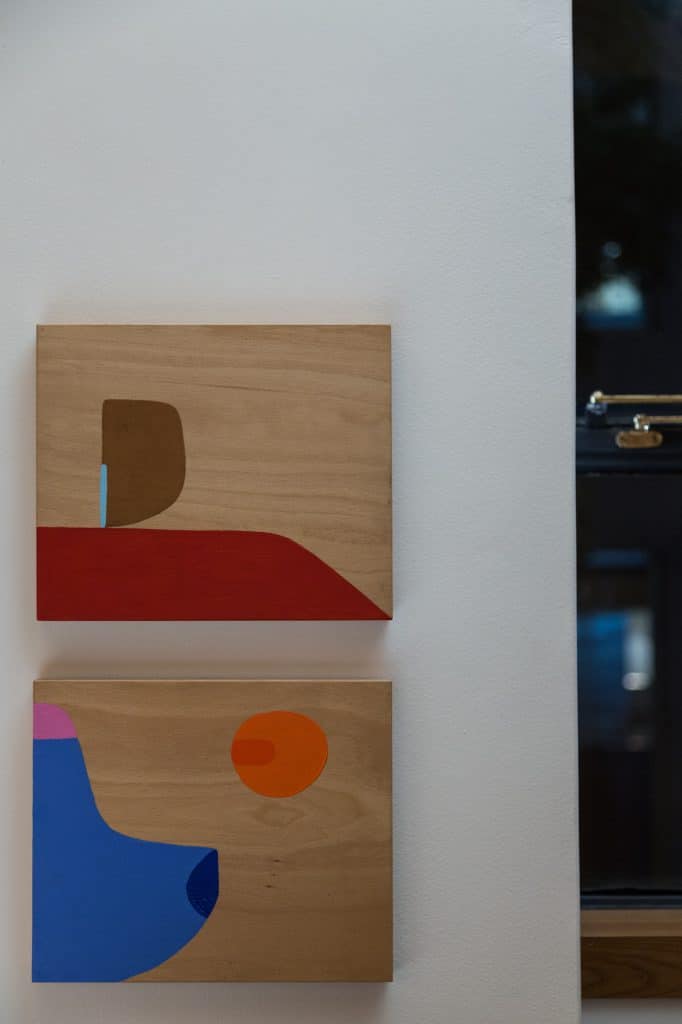 Peter Tunney is a Neo-Pop artist working with language and text. Born in 1961 in New York, he was a former Wall Street executive, until 1987 when he unexpectedly kickstarted his career as an artist.  His large-scale paintings are created from collaged packing materials and newspapers. Drawing imagery and phrases from popular media sources, he created block-letter aphorisms such as “DON’T PANIC” and “THE TIME IS ALWAYS NOW.” This technique references the language-based works of both Christopher Wool and Mel Bochner.

In Peter Tunney’s new Art Basel 2019 exhibition titled “REDACTED”, Tunney delivers an evolved body of work that is a clear distinction from the whimsical, lavish works that Tunney has gained notoriety for since 1987, when Tunney first declared himself an artist. Although still eccentric and unconventional, Tunney executes his nuances in a minimalistic and blunt style while staying authentic to his bold form. Expect the unexpected in this new installation, Tunney spreads his messages with a clear understanding of the time we live in. “REDACTED” is Tunney’s obsession, and his progression. Through this new show Tunney is finally finding calm within his chaos. “I have something to say, and I’ve found a way to say it,” explains Tunney. He continues, “It’s barely a political statement. It’s bigger than that, it’s a statement about humanity.” 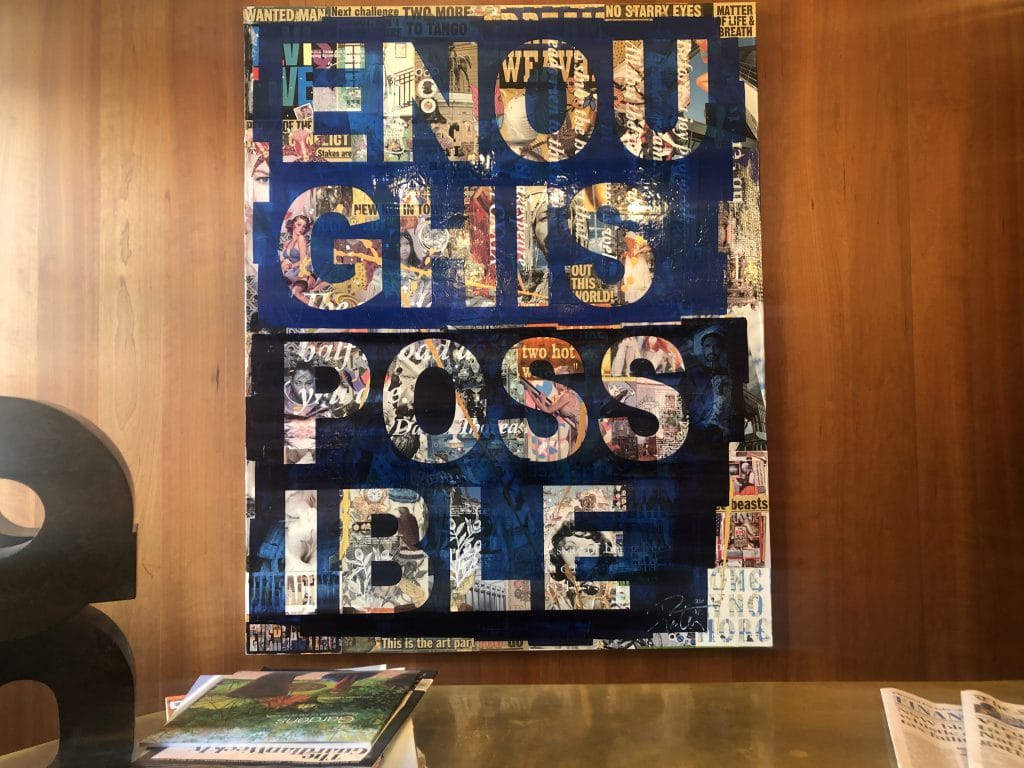 Thomas Campbell (born 1969 in California, US) has been described in the New York Times as, “an Aries, an artist, a film director, a painter, a photographer, a sculptor, a skateboarder, a surfer of twin fins, of single fins, of fish fins, long boards and even of lunch trays, a global traveller, a record-label founder, a designer of album covers, a stuff maker, a dude who keeps everything at hobby’s distance to further his enjoyment of life.”

Campbell now lives in Bonny Doon in Northern California and is a member of the American artist collective Beautiful Losers, a bi-costal collective inspired by various aspects of street art culture, including graffiti, skateboarding, punk and hip-hop music. The bizarre bronze bird aptly named Charles that is a part of the collection at Paramount by The Office Space is a part of a 2011 series entitled Capture and Release that was exhibited at Half Gallery in New York City. 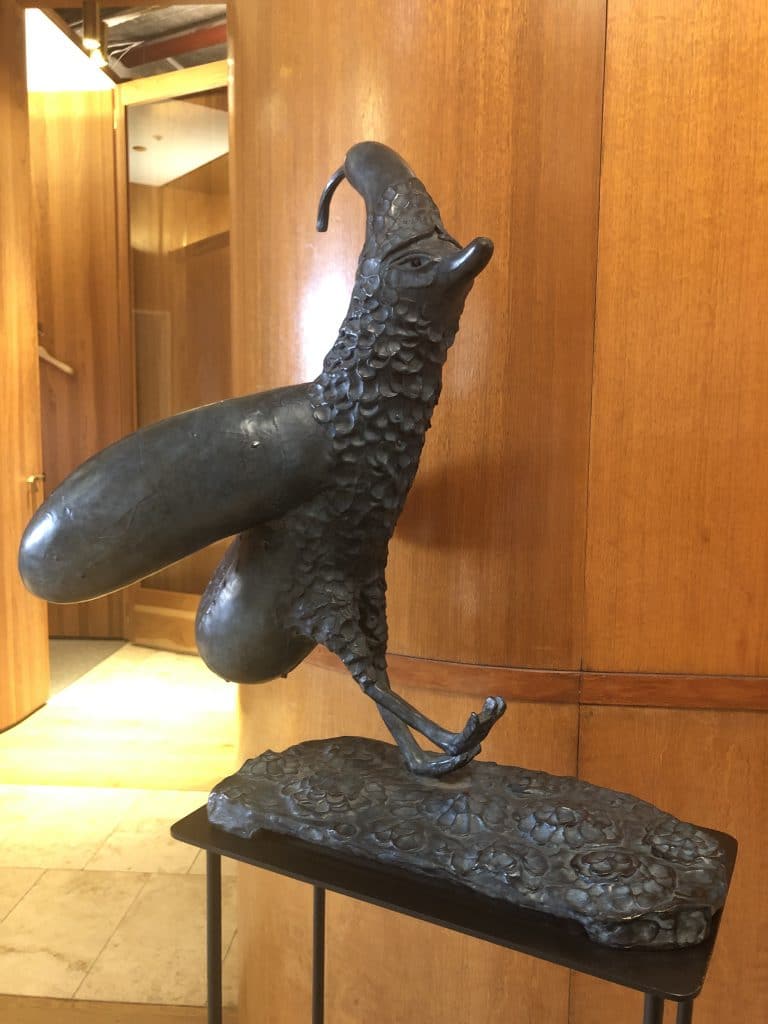