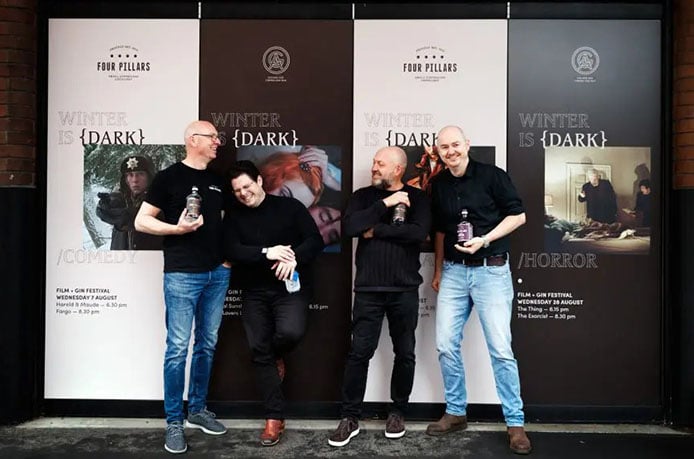 Fact #3: On Friday June 12, Four Pillars will open its (much-anticipated) Surry Hills ‘Laboratory’ for a (much-needed) Weekend of Gin!

Masterminded by ‘professional drinker and talker’ Stuart Gregor, ‘branding guru’ Matt Jones, and ‘soulful distiller’ Cameron Mackenzie, Four Pillars launched in 2013 and has quickly become one of the world’s benchmark distilleries and a craft spirit at the forefront of the current gin revolution.

When Four Pillars released its first batch of gin – a rare dry gin harnessing 10 Australian native botanicals – from their Yarra Valley distillery, there were fewer than 15 gin distilleries in Australia. Now, there are more than 170.  Against some stiff competition, Four Pillars was named as the Liquor Brand of the Year (2019) at the Australian Liquor Industry Awards last October before taking out the IWSC award in London a month later.  Quips Gregor, “We said that the [ALIA Award] was like winning a Logie, which would make [the IWSC] like winning an Oscar.”

Despite their small batch production philosophy (the distillery produces around 100,000 cases annually), Four Pillars has some impressive productivity statistics. According to Stuart Gregor sales have doubled every year since launch, with retail revenue of around $35 million in 2019. Not surprisingly, this attracted the attention of brewing giant and Australian craft beer specialist Lion and the company invested in Four Pillars gin, taking a 50% share of the business.

Now, Sydney will be treated to the full brand experience with the opening of the Four Pillars Laboratory at 410 Crown Street, Surry Hills (the 1939 Bussell Brothers building).

Guided by Jones and Leah Mackenzie, the brand’s Experience Director, interior designer Yasmine Ghoniem from YSG Studio (formerly Amber Road) has created an exciting retail/education and hospitality hub. The Gin Shop is at ground level, selling signature and limited-edition gins alongside the bar gear, books, merch and Made From Gin marmalade and chocolate. Upstairs is a Gin Lab featuring a working 70L still (Eileen, named after co-founder Matt’s mother) and the destination cocktail bar, Eileen’s.

The warm, moody interior takes its industrial cues from the heritage-listed building. Ghoniem’s masterful use of Australian timbers and bespoke lighting – with pops of juniper blue for excitement – make sure all eyes gravitate to the custom-designed bar. The result is “a delicious playground for Sydney’s gin lovers and a new bucket list destination for gin fanatics around the world,” says Jones.

The imposing steel doors open for business on Friday, June 12 ready for what has been unofficially re-named ‘World Gin Weekend’. To celebrate, Four Pillars has planned a weekend of activities, masterclasses and cocktail-fuelled fun, inviting Sydney’s keenest gin lovers to toast the responsible relaxation of lockdown.

Stuart Gregor, unmatched in his knowledge and enthusiasm for the juniper juice, will host seven masterclasses on the opening weekend, for a safely distanced 10 guests per session.  Each masterclass will run for approximately 60 minutes with a welcome G&T included, tasting of at least four gins (probably more), plenty of stories, some random music and the privilege of having an early look around the venue… The comely curves of the in-situ copper still and the glowing juniper blue form that is Eileen’s Bar, a stage for world-class cocktail making and shaking. To avoid disappointment, those keen to visit are encouraged to visit the brand’s website to book sessions and subscribe for email updates.

“Four pillars is a producer first and foremost – we are makers of gin and everything else, even beautiful bars in Surry Hills, is secondary to our core purpose – making the world’s best gin,” says Gregor, a journalist and marketer before he caught the gin bug.

“Our home is a big beautiful distillery in Healesville that is a bit of a shrine to gin making. The fact you can also get great drinks, warm hospitality and terrific experiences is a wonderful, essential add-on. It all adds to the package but the punters won’t keep coming if the gin’s no good.”

When COVID-19 hit the distillery redirected their making and manufacturing skills to quickly start making hand sanitizer. “It actually wasn’t a tough decision at all,” says Gregor. “We had plenty of ethanol, we had a recipe from the WHO and we had hospitality staff who were ready to pivot from bartenders to hand sanitizer packers in a heartbeat.”

But now, the focus is right back on gin. “Where we should be and where we love to be.”

Please note: Current capacities in the Gin Shop, Gin Lab and Eileen’s Bar will be restricted according to NSW state-mandated Covid-19 protocols so numbers will be strictly limited.