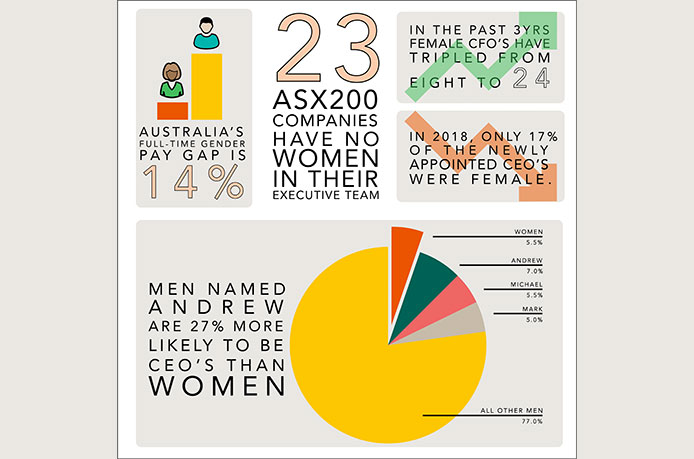 Women are gaining higher positions in business, government and in their communities, and with that are being seen and heard on their own terms. We are moving closer to gender equality. But is progress too slow?

The average share of women in national legislatures has reached 21.5% worldwide but at the current pace it will take 52 years to reach gender parity. Australia’s current government isn’t much above the global average. In the 2019 Australian federal elections, the number of Lower House MP’s and Senators for the elected Liberal government was only 14 females out of the 77. That’s only 23%.  A small jump from 12 women in the previous election. Australia has dropped from 15th in the world for female representation two decade ago, to 50th. This drop is not because the numbers have changed, but because the rest of the world is making change at a faster pace. A considerable outlier is Rwanda with 61% of their national legislatures being women. Rwanda maintains a quota and reserves 30% of their seats to women. The Labour Party are on the path of equal representation with their adoption of a quota and are expecting to have more than 50% female representation by the next election.

Similarly, we haven’t yet achieved equal representation of women in corporate leadership and executive positions. And why not? According to the Credit Suisse Research Institute “companies with more female executives in decision-making positions continue to generate stronger market returns and superior profits.” Australia is considered one of the best in the National Geographic’s Inclusion index and is positioned as a leader across Asia for diversity with our record high numbers of women in ASX200 directorships. Female ASX200 CFO’s have tripled in the past three years to 24 now. There’s progress, but unfortunately there’s also regress. Only 12 companies have a female CEO down from 14 in 2018, that’s just 7% of the ASX200. And out of the 23 newly appointed CEO’s in 2018 only 4 were women. In 2019, men named Andrew were 27% more likely to be ASX200 CEO’s than women. Executive teams average 22.25% female, which is only up from 20% in 2010. And there are 23 ASX200 companies with no women in their executive teams at all. Australia’s slow pace of achieving equal representation of women in leadership is stagnating progress. Gaining positions of leadership is a means for women to be seen and heard on their own terms.