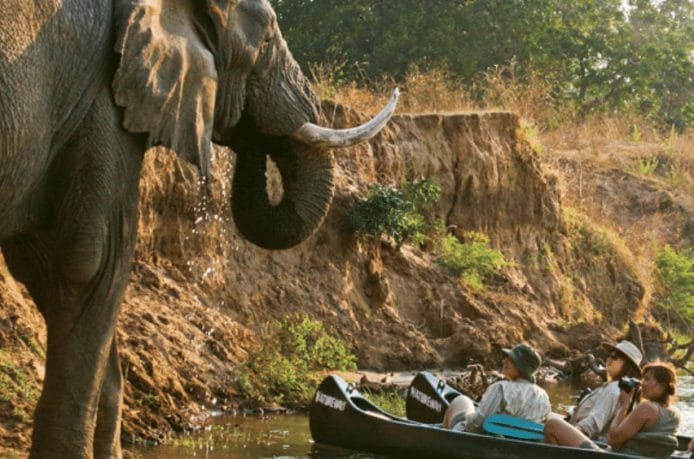 Now that travel is the new normal, those of us that know the ropes, want to travel better! We’re already halfway down the off-beat track, searching for experiences that go beyond the ‘new’, and absorb us on a deeper, more personal level. But of course, not all holidays are created equally, and one man’s vacation is another man’s nightmare.

The key to an enjoyable holiday is making WHAT you do as important as WHERE you do it. This month we are thrilled to invite travel writer Alison Stewart to share her expertise and insider knowledge in our TREND article.

The brief? Tell us your top picks for five different (though equally fabulous) holiday experiences. We want to know the hottest getaway spots for Romance, Relaxation, Adventure, Family-Friendly experiences and (of course) Food.

Keen to keep your finger on the travel pulse? Check out Alison’s “new kid on the block” tipoff and get yourself there before the rest of us!

ALISON STEWART is a Sydney-based writer and journalist. As a travel-writer Alison writes for Fairfax media’s Traveller magazine, with a particular fondness for wild places! You can check out Alison’s articles here!

Romance – the River Nile, Egypt There’s traditional romance – moonlight over Montparnasse with the Eiffel tower sparkling, or evening aperitifs on Venice’s Grand Canal – and then there’s the River Nile.  Gliding down this eternal ribbon of light invokes something profound within the raucous babble of Egypt, land of the pharaohs. The vastness of African sky, the density of heat, the multifaceted light and the reflective river silence conjure a rich saga of empire, greed, longing and beauty. Without the Nile, there would be no Egypt as we know it, no rich and enduring culture, no antiquities nor temples to power and civilisation. It is the watery equivalent of the tree of life, representing the story of our world. To journey on this serene waterway is to travel as the pharaohs did, gliding past the ancient marvels that pepper the river plains. There is surely nothing more romantic than that.

Relaxation/Nature – Kgalagadi Transfrontier Park, South Africa and Botswana The world jostles with sound and fury but there are still pristine places like the “great thirstland” of the remote Kalahari, an ecosystem empty of people, yet rich with game sprawling across Botswana, South Africa and butting against eastern Namibia. This is raw Africa in all its beauty and viciousness – unplugged and unfenced – no connectivity outside the border camps, off-road vehicles mandatory, food, fuel, water and firewood to be carried in and no predator barriers at the wilderness camps. A place of absolute serenity. Unlike the Kruger National Park or the Serengeti, game sightings in this ecological corridor that allows for animals’ natural cross-border migration are often private viewings – you’re lucky to see another vehicle. The big-sky, 3.7-million hectare Kgalagadi Transfrontier Park, recently recognised as a UNESCO World Heritage cultural treasure, is one of the world’s largest national parks, a place to both lose and discover yourself. Its pale-grass savannahs bisected by two ephemeral fossil rivers and dotted with acacia camelthorn trees, candlepod bushes and red rolling dunes are home to the hunter-gatherer, Khomani San, whose culture stretches back more than 20,000 years. Deep in the territory of the animal kingdom’s apex predator, the powerful black-maned Kalahari lion, you don’t simply experience “sightings”; you witness entire stories of the veld. Nature at its most perfect.

Adventure – Canoeing Mana Pools, Zambezi River, Zimbabwe Adventure lies in the many ways that Africa can make you suffer – cerebral malaria, bilharzia, tsetse fly, man-eating Nile crocodiles, columns of giant Matabele hissing ants, lion, elephant, crocodile and hippo attacks. But what is life, after all, without a little feral excitement? To canoe down the wild Zambezi River through 80 kilometres of Zimbabwe’s World Heritage-listed Mana Pools National Park, camping each night in mobile, tented camps, is to experience true adventure. Mana Pools, part of Africa’s ancient Great Rift Valley, is one of Africa’s last great wilderness areas, game-rich beyond belief as the waterholes and streams evaporate in the June-to-October dry season. Here, 15 degrees south of the equator, tropical moisture and heat yield a rich, dry-season smorgasbord of sweet grasses, mopane, sausage trees, baobabs, Natal mahogany and the protein- and mineral-rich pods of the winterthorn (acacia) tree – “the magic time of the pods”, as our guide, Mark, puts it. It is animal heaven – human, too – for those lucky enough to visit. We stop regularly – for game walks that include two close lion encounters, elephant mini-charges, the hint of leopard, buffalo and the trails of dozens of crocodiles moving from drying waterholes to river. But it is the Zambezi’s territorial hippo pods we negotiate with the greatest trepidation. “Hippo can move 20km/h under water,” Mark says. “It’s important to canoe quickly through their territory, single file. The last hippo strike was seven days ago when a hippo ‘banzaied’ off the bank between two canoes.” Hippo strike? “If this happens,” Mark continues, “you roll in a ball and float down the river until rescued.” The rushes of adrenaline enrich the quiet times. There is nothing quite like watching the moon setting red over the Zambezi and the stars slewing across the sky.

Family friendly – Tasmania  Once upon a time, when our children were growing up, we had a magical holiday. It had everything – snow, sun, wild animals, misty mountains, crystalline lakes, black swans, the Cadbury chocolate factory. Are you there yet? Exactly. Tasmania. Jammed into a campervan, we circumnavigated that little island by road, and if that sounds like hell, amazingly, it wasn’t. Certainly, there were spats, but as the days rolled by, the world got funnier and things that had been important suddenly weren’t. Those days are gone, our children are adults, but of all our family holidays, it was a highlight. I’ve reprised the trip without children, stepping back into the tiny footprints of yesteryear and Tasmania is still my choice for families, not least because it’s so incredibly diverse and you don’t have to travel too far from home – who needs eight-hour plane trips and long stopovers? Driving and camping in Tassie offers a cornucopia of wonders. There’s Hobart’s evergreen Salamanca Markets and Battery Point lolly shop, MONA, Mount Wellington and the black swans of the Derwent. Port Arthur’s historic site, the extraordinary rock formations of the Tasman Arch, Blowhole, Devil’s Kitchen and Tessellated Pavement and the Tasmanian Devil Park. Follow the sun up the East Coast with its blue-gold beaches fringed by she-oaks and pink granite peaks. There’s Coles Bay, Freycinet, St Helens and Bay or Fires. Turn inland to sail down the gorgeous, sometimes forgotten Midlands, through colonial sandstone villages rich in history – Campbell Town, Ross, Oatlands, and Richmond. Magnificent, pristine Tasmania yields Strachan and tea-coloured Macquarie Harbour, Sarah Island with its tales of convict cannibalism, Ocean Beach and Hell’s Gate.  The heartbreakingly beautiful Cradle Mountain Lake St Clair National Park can sometimes give the unseasonal gift of snow to delighted children with Dove Lake shrouded in silver.  The Bass Strait coastal village of Boat Harbour is edge-of-the-world Roaring Forties but sheltered. There’s reliable surfing, fish and chips, good coffee and free camping. Nearby Stanley’s The Nut chairlift takes visitors up the 30 million-year-old volcanic basalt monolith. Another kid favourite chairlift waits in Cataract Gorge, Launceston, plus peacocks, scones and jam and the Alexandra Suspension Bridge. Oh Tassie, you’re a gift that keeps on giving.

Food – Tuscany Spring in Tuscany. It’s an enduring fantasy, mythologised in literature and film, of a sacred place of simple enchantment where our better selves emerge. If it were only the landscape, Tuscany would return to the ranks of merely the exquisite. But this area, settled about 1000 years ago by the Etruscans, then the Romans, has embraced the kind of civilisation that values history, traditional, simple seasonal fare, feasts and festivals, custom and community. That’s where the food comes in – Tuscan food is based on the Italian idea of cucina povera or “poor cooking”- once by necessity, now by choice. This is where everything produced is consumed – the glut of tomatoes, olives, truffles, mushrooms, grapes, the entire pig – all bottled, potted, dried, smoked, rendered, distilled, as it always has been. As poppies flood the fields, cherries dance on trees, roses and honeysuckle explode across hedgerows and early summer black truffles perfume every risotto. In Tuscany, the patterns of life are honoured. As the world modernises furiously, timeless Tuscany strengthens, honouring its traditional fare with rustic recipes based on seasonal, fresh, high quality, uncomplicated food, often based on bread, beans (cannellini are a staple) and roasted meats. Tuscans are often nicknamed mangiafagioli, bean eaters and beans appear in all guises – like zuppa di fagioli, fagioli con salsiccia – beans with sausage. Tuscan food is abundant, locally grown and most important, it’s “nostrale” (belonging to us). Tagliere di salumi toscani, tagliatelle al tartufo (truffles), wild boar pappardelle, fresh porcini, rustic bread stuffed with prosciutto, olives, capers, pecorino toscano, olive oil and pomodori secchi. Soups are favoured – like ribollita, a bread and vegetable comfort soup, pappa al pomodoro or panzanella in summer – salad of bread soaked in balsamic mixed with onions and tomatoes. And bistecca Fiorentina, a huge T-bone steak, traditionally from the Val di Chiana. Castagnaccio from Tuscany’s Apennine mountains, made simply with chestnut flour and water, is a “poor” sweet treat from the days where chestnut trees were the main resource. Wash it all down with classic red wines like montalcino and montepulciano orChianti Classico from the hills between Florence and Siena – the gorgeous local sangiovese-based wine that tastes like Tuscany – spice, orange, blackberry and cherry. Magnifico!

New kid on the block – Mexico My pick is Mexico, which bears little relation to the country vilified by US President Donald Trump. Mexico is far more than its Breaking Badstereotype of sombreros, Tex-Mex tacos, nachos, burritos, enchiladas, chilli con carne, tequila, cactus, ponchos, dust and drugs. This diverse land of the sacred jaguar, snake and eagle offers a convoluted history that negotiates Mesoamerican civilisations – Olmec, Toltec, Mixtec, Mayan, Zapotec, and Aztec – wars of Spanish and US colonisation, plunder, suppression, and corruption. From the great seismic sinking bowl of Mexico City, into cactus lands, tropical jungles, past petrified limestone waterfalls, Spanish colonial towns and quaint pueblos, fields of agave, villages daubed in bold colours, turquoise sinkholes, ancient pyramids and temples, Mexico offers gastronomic and artistic marvels. And its people are gentle, funny and obliging. They laugh about Trump, reducing him to “that clown north of the border”. He is but a tremor in their moveable history. Visit soon before the crowds arrive.