Thought: Women Do It Better 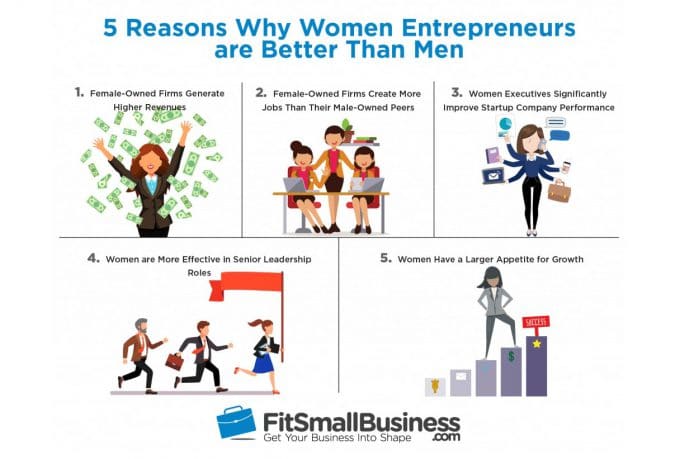 Women comprise over 50% of the world’s population and influence 85% of purchasing decisions, however entrepreneurship is an area that is dominated by men. According to the U.S. Census Bureau, more than 75 percent of businesses are male-owned.  The tide is certainly turning however.  Women-led businesses are the fastest growing segment of entrepreneurship in the U.S. Between 2007 and 2015, the number of firms owned by women grew by almost 20 percent as opposed to the growth rate of 4.86 percent of male-owned firms during the same time period.  And although men might still be running more businesses, their revenues and job creation rates lag behind their women peers.  Extensive research reveals that startups founded or cofounded by women performed better than male-founded startups over time.

According to a 2018 study conducted by Boston Consulting Group and MassChallenge, a US-based global network of accelerators, female led businesses generated 10% more in cumulative revenue over a five-year period: $730,000, compared with $662,000 for the average male-led startup. For every dollar of funding, these startups generated 78 cents, while male-founded startups generated less than half that—just 31 cents.”

The comprehensive study analysed the 1,500 businesses MassChallenge has backed since its founding in 2010, and ruled out factors that could have affected investment amounts, such as education levels of the entrepreneurs and the quality of their pitches.  Leading US VC firm First Round revealed that over its 10 years of funding start ups, companies with a female founder performed 63% better than their investments with all-male founding teams. In businesses where men and women share ownership, one female co-founder is enough to dramatically improve company performance.

Companies with a female founder performed 63 percent better than companies where founders are all males, in terms return on investment. It’s not just co-founders. Women executives also improve company performance. In fact, the more female executives, the higher the success rate.  A longitudinal study conducted by Dow Jones Venture Source tracked more than 20,000 VC-backed companies in the U.S. that received funding from 1997-2011 to analyse the impact of female executives, including founders, in startup success.

Women are More Effective in Corporations

This correlates with what we know about the female advantage in corporations. Research from Catalyst found that Fortune 500 companies with the highest percentages of women board directors produced an average of 66% higher ROI than those with the least.  Research out of MIT indicates that group intelligence is increases with the number of women on a team, and research from Gallup found that retail stores with more gender diversity experienced a significantly higher revenue growth rate. Research by the Harvard Business Review shows that women are more effective leaders than men in all positions of authority in a corporate setting.Women outperform men the most in top management positions including executive roles.

Out of 16 leadership competencies, which included problem solving, driving for results, and collaborating with others, women scored higher than men in all but one (being “strategic perspective”) .  Effective leadership improves the workforce productivity by driving for results and inspiring others, helping to attract and retain top-caliber talent, and ultimately contributing to the company’s profitability. According to research company CEB, firms with the strongest leaders have almost double the revenue growth of businesses with weaker leaders.

It’s not just good for business to have women in founder and executive roles.  Women-led businesses are good for society.  Female entrepreneurs are more likely to re-invest profit into into education, their family and their community, causing a multiplier effect.  With this in mind, women are more likely to start businesses with both social and economic goals, or hybrid ventures.

Female-owned firms also create more jobs than their male-owned peers. According to the Census Bureau, the number of U.S. employees who work at businesses owned by men only grew by 0.37 percent[1] whilst the number of employees at female-owned firms experienced a growth rate of 18.39 percent [2]. Women-owned firms created 1.24 million more jobs during that eight-year span than their male-owned counterparts even though the latter run more businesses.  This is significant as jobs stimulate the economy by encouraging consumption and creating more business. In addition,the annual payroll of female-owned firms outgrew male-owned companies. From 2007-2015, the annual payroll of businesses owned by women grew by 36.52 percent while male-owned companies only grew by 16.54 percent.

One of the key components of being an entrepreneur is the ability to grow a company. Growth may be measured in the form of expansion, additional employees, or new ventures, but all of these contribute to the entrepreneur’s net worth.  Womenable, a social enterprise firm focused on women’s entrepreneurship, analyzed the growth trends of male- and female-owned companies from 1997-2014, and found that businesses owned by women saw a 72.3 percent growth. Male-owned firms, on the other hand, grew by 45.1 percent over the same time period. A BizWomen survey of 1,366 business owners revealed that 32 percent of female-owned businesses are in active expansion mode compared to just 27 percent businesses owned by men. Not only are women more interested in expansion, they are also more keen than men to start new ventures. A Centre for Entrepreneurs study of over 400 entrepreneurs and executives revealed that close to half of women polled plan to start another business within the next three years, compared to just 18 percent of men.

Men Have Greater Longevity in Business

Tempering the higher revenues that female-owned firms generate is well-documented that male-owned businesses out-survive female-owned firms. Businesses owned by men have a 75.1 percent three-year survival rate, compared to 69.5 percent for women-owned companies. But survival rate is not necessarily the true measure of success in entrepreneurship, as owners close their businesses for a variety of reasons that don’t necessarily mean failure. Some might voluntarily exit because they’ve sold the business, or some have managed to achieve their business goal and decided to close up shop. Others might have closed their doors because they wish to pursue a new lifestyle, and then there are some who just retired.

Despite these successes, women-led businesses comprise a small percentage of the companies funded by venture capital, and when they do receive funding, it is often less than half what a male company would receive. According to the analytics firm PitchBook and the advocacy organization All Raise, last year female founders received only 2.2 percent of the $130 billion in venture money invested in the United States.

The data from the BCG and Masschallenge study revealed that companies founded or cofounded by women garnered an average $935,000 in VC investments, which is less than half the average $2.1 million invested in companies founded by male entrepreneurs. In the world of venture capital, the odds are not stacked in women’s favour. According to the venture-tracking site Crunchbase, as of October 2017, women made up just 8 percentof investing partners at the top 100 VC firms. This huge underrepresentation is not only a problem of homogeneity within VC firms, but also has significant implications for whose ideas VC firms support. The evidencesuggests that having no female partners makes VC firms less likely to invest in female-founded or female-led firms.

Although disadvantaged from the outset, the challenges facing female founders builds both resilience and adaptation—skills male entrepreneurs surely have the capacity to develop, but without the same pressure to do so. According to BCG’s analysis, that makes all the difference.  The more pushback from VCs, the more chances to distill a pitch, refine a business plan, and interrogate business weaknesses—all of which can lead to a better outcome once a business is up and running.

Further, the less the male VCs know about a product being pitched by a woman, the better suited she is to establish herself as an expert. Research by the Harvard Business Review in 2012 and again in 2018 revealed some key traits that may make women more successful in business than men. Both men and women can exhibit feminine leadership qualities, but the tendency, both biologically and culturally, is for women to embody them more.  These include a host of characteristics such as long-term and global perspective taking, nurturing, empathy, effective communication, credit distribution, inquiry, and networked thinking, thoughtfulness, intuition and patience. These are distinct from the more ‘masculine’ characteristics such as risk-taking, courage, decision-making, assertiveness and rationality.

In a global survey of 64,000 people in 13 countries, two-thirds of respondents (both genders), ranked feminine leadership traits as essential to solving today’s most pressing problems in business, education, government and more. The feminine style of management is a growing trend within businesses and is characterized by a form of transformational leadership style.  Also known as soft skills these are considered by the World Economic forum as essential traits for the workforce of the future.

While entrepreneurship is an area dominated by men, female-owned firms generate higher revenues, create more jobs, and perform better in terms of providing investment returns. In addition, women are more effective leaders and have a larger appetite for growth. This bodes well for a future where men and women work together for economic and community advantage.   [1] from 41.05 million to 41.20 million from 2007-2015 [2] from 7.5 million in 2007 to 8.9 million in 2015