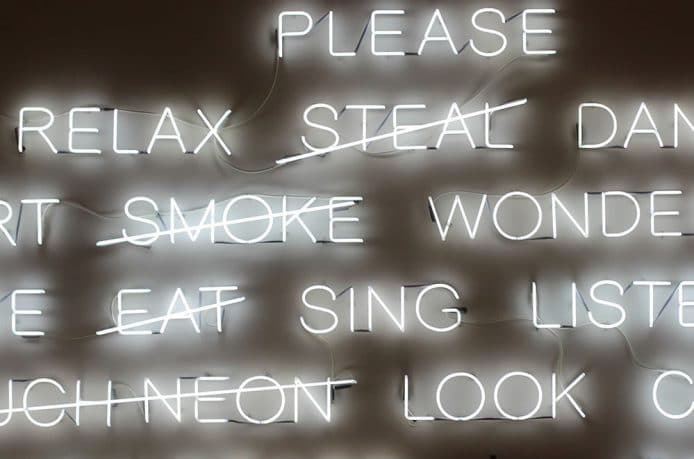 In an era of click bait, fake news, massive media redundancies, shrinking attention spans, and the age of the individual publisher, what place does our society have for words, and are we saying anything important? Last year, a much-quoted study by Microsoft revealed that the average attention span had fallen to eight seconds, down from 12 seconds in the year 2000, and one second less than the notoriously distractible goldfish. Microsoft CEO Satya Nadella responded by stating “The true scarce commodity” of the near future will be “human attention.” This undoubtedly affects every aspect of how we communicate and receive information – personally and professionally. We have increasingly short-handed our interpersonal interactions, whittling down in the span of a generation from hand-writing letters, to fax, to email, to SMS, to a single emoji. The expressed intent of The Office Space Thought pieces is to take the time (and the word count) to expound and ruminate on our monthly themes so, please, put down the mouse (and don’t swipe right if you are on you mobile), and come with us on this journey to explore how words in our public area are increasingly being shrunk, shaped and siloed, but also how to navigate this new terrain – for business and for pleasure.

CONTENT SHRINKING: An ADHD Audience According to Joseph McCormack, the author of BRIEF: Making a Bigger Impact by Saying Less, the average professional gets over 300 emails/text messages a day and spends over 20 hours a week responding to them. Attention spans have shrunk by almost one-third. In 2000, the average attention span in an office environment was 12 minutes; now it’s less than 8 minutes. If a lengthy email comes in, it’s abandoned in 30 seconds and, even in real life, if someone is long-winded over one-third of listeners mentally check out at the 15 second mark. The online age has even spawned an acronym (irony noted) for this dismissal of anything not easily consumed in one quick bite: TL;DR, which means ‘Too Long, Didn’t Read’. Editing is a necessity in today’s business environment. Slide decks are clipped, emails are bullet-pointed, and ubiquitous staff communication can be replaced by a quick SMS or instant message. But this is not inherently negative. Overlong composition can obscure meaning, waste time, and reflect a lack of time or commitment to refine an effort through successively more concise drafts. Take Pascal’s famous line “I made this so long because I did not have time to make it shorter”, and French writer and aviator Antoine de Saint-Exupéry’s beautiful prose “Perfection is achieved not when there is nothing more to add, but when there is nothing left to take away”. Of course, deleting is not always equivalent to improving, and concision does require the writer to intelligently differentiate and structure his message with care for his message and his audience’s tolerance. In the interest of your own staying power, lets move on.

CONTENT SUPERFICIALITY: Staying in the Shallows Our widening attention deficit is not just affecting communication on home turf, but is dramatically shaping the so-called fourth estate of the realm: journalism. Our increasing appetite for new news is creating an accelerated churn cycle which sees a lightweight smattering of sensationalised stories with little time for more rigorous investigation. This topic was at the heart of last year’s Andrew Olle Media Lecture when presenter Waleed Aly, Australian writer, academic, lawyer, and media presenter, asserted that “…even in print – what has traditionally been our most serious, reflective medium – there’s precious little room available for the idea that has taken days to percolate.” Spotlighting the constant competition between media outlets to have better ratings and faster news, Aly used this platform to urge the media to stop pursuing short-term victories and “virality” at the long-term cost to its authority. That authority, it seems, is increasingly being devalued by mass redundancies across media intuitions. It’s not just our words but our wordsmiths that are being edited, and with it the ability to deliver deeply considered and probing journalism. Last month, on World Press Freedom Day ironically, the Fairfax media company announced it would cut 125 jobs at their main mast-heads of The Sydney Morning Herald, The Age in Melbourne and The Australian Financial Review, as well as the websites Brisbane Times and WAtoday.  This equates to almost 500 reporters and editors that have left Fairfax since 2011, leaving only 500 Fairfax journalists remaining on staff. Responding to this latest round of redundancies, Media, Entertainment and Arts Alliance (MEAA) CEO Paul Murphy questioned how Fairfax would be able to “produce the great stories, the revelations, the exposure of corruption that Fairfax is famous for” and upon which our democratic nation relies. Murphy blamed the economic climate created by “global monoliths, Google, and Facebook, consuming virtually all of the advertising revenue from digital. But not paying a single journalist, a single photographer, not producing any stories but taking all the money…. That’s a massive, massive challenge for media worldwide and quite frankly for governments worldwide to confront.” Independent journalism plays a fundamental role in creating and maintaining healthy, democratic societies. We risk an erosion of these ideals if we are either uninterested in these deeper themes or they simply are no longer produced due to lack of resourcing.

CONTENT SHAPING: Journalistic Integrity under Fire It is not only the length and the depth of mainstream media that is under threat, but also the very nature of the content itself. In his Andrew Olle address, Aly acknowledged that, rather than encourage measured debate, media broadcasts often pit guests against each other because “the most successful content will be strident, provocative and polarising; …it will infuriate more than it inspires; that above all it will evoke a reaction.” Manipulative, yes. But this has been taken to a whole new level with fabricated content. The catch-cry of President Donald Trump’s first 100 days in office was to cry “fake news” at anything that he didn’t like the sound of. This is the same man that is believed to have won the election by “fake news” websites purporting to be news sites releasing a deluge of false stories that painted Hillary Clinton in a negative light. This was summarised by Timothy Egan from the NY Times when he said : “You see it in our politics, with fear-mongering slogans replacing anything that requires sustained thought. And the collapse of a fact-based democracy… a byproduct of the pick-and-choose news from the buffet line of our screens.” Taking Egan’s ‘buffet line’ analogy further, it is essential that we realise our responsibility for our media diet, in the same way we are ultimately responsible for what we eat. Rather than being spoon-fed our news we must exercise rigour and critical thought when choosing and consuming news, current affairs and even social media commentary. We are what we eat, or in this case, what we read and imbibe.

CONCLUSION In an era of click bait, fake news, massive media redundancies, shrinking attention spans, and the age of the individual publisher, what place does our society have for words, and are we saying anything important? With content, context is everything. Clarity and brevity is a virtue for business communication, but it is not sufficient to base your entire current affairs knowledge on tweets updates. In the same way, the beauty of a novel or long-form essay is bliss when there is space to enjoy it, however the brevity of pictographs or podcast can also allow you to appreciate the bigger picture. We advise a healthy diet across a variety of media outlets, shaped by your preferences, but also consuming of those ‘groups’ that are good for you (think Q&A over Gogglebox, or Radio National over KissFM). And, in the same way that mindfulness eating increases nourishment from food, mindful and critical consumption of media is vitally important in shaping your world view. You are what you eat/consume. Want more? Stay in touch and subscribe to our monthly newsletter here.