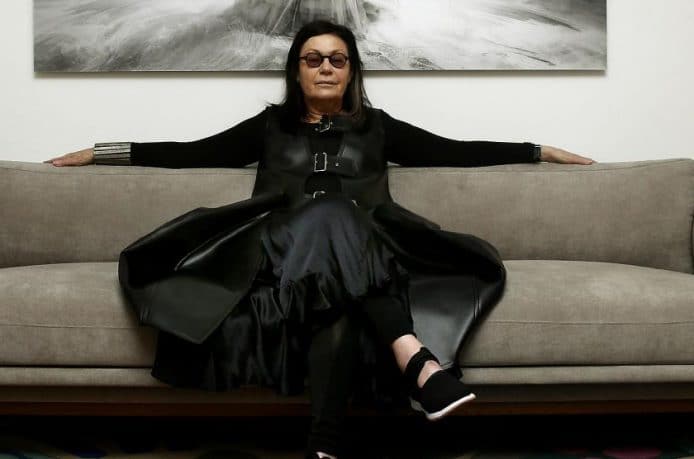 “Universities represent the most meaningful pillars of my life. Education is what drives me; both the learning that I’m able to deliver to others, and equally, or perhaps even more important, the education that I am constantly building on for myself.”

Dr Gene Sherman AM has devoted a lifetime to learning: through formal education (obtaining a Bachelor of French Literature from Witwatersrand, Johannesburg and a PhD in French Literature from University of Sydney); teaching (Adjunct Professor, UNSW Art & Design, and Head of Modern Languages at Ascham Sydney); and through significant contribution to arts, literature, design and architecture (for which she has been recognised as Member of the Order of Australia, Officer of the ’Ordre des Arts et des Lettres, and an Honorary Doctorate of Design from both University of Sydney and UTS).

After almost two decades dedicated to formal education, Dr Sherman then spent the next two decades operating one of Australia’s most influential contemporary art galleries, Sherman Galleries, and another eight years managing 37 separate creative projects commissioned by the Sherman Contemporary Art Foundation (SCAF). Now, Dr Sherman has conceived a new endeavour that deftly brings together her two loves – learning and culture. Founded in 2017, the Sherman Centre for Culture and Ideas (SCCI) is a “Hub-based initiative” featuring two public programs each year, one focusing on the discipline of fashion, the other on architecture. SCCI represents a new paradigm in learning around ‘thematiques’ and from some of the leading fashion and architecture identities and influences around the world.

Naomi Tosic sat down with Dr Sherman to discuss the power of education, and an open mind, to enrich our lives.

Gene, your family left Johannesburg because of the devastation caused by apartheid so I am sure this quote from Nelson Mandela will resonate – “Education is the most powerful weapon which you can use to change the world”. How has education allowed you create such a significant life and legacy?

My family made the decision to leave South Africa after the 1961 Sharpeville massacre in which peaceful protesting teenagers were summarily killed by police machine gun fire. Enough was enough.

The family’s origins were in Europe – Lithuania under Russian rule, Austria under the Habsburgs and various Emperors, France to which David Lemchinas, my grandmother’s brother fled, escaping (pre Soviet Union), Tsarist oppression.

The emphasis on education allowed family members to flourish (often in one generation) as they sought to acclimatise themselves in new countries, in relation to new cultures and, importantly, as they were obliged to learn new languages.

This singular focus has always been clear for us as a family. The majority of Jewish families persecuted (often as Christ killers) throughout history, well understood the critical importance of education in making progress through life.

The great British historian / art historian Simon Schama’s Story of the Jews (in three volumes) brilliantly sums up the centuries-long tale of forced migration and displacement, consciously underpinned by a continuing emphasis on education.

Your father’s family were very education focused and believed “the life of the mind and intellectual pursuits were the keys, the only keys, to a successful and fulfilled life”.  What else must accompany intellect and learning to successfully navigate this life?

On my father’s side, I was raised to believe that pursuing the life of the mind was and would be my pathway to personal fulfilment. On my mother’s side, the emphasis was on compassion for others and social justice as an abiding modus vivendi. I was encouraged to take action where I encountered unfairness and /or had the ability to lend a hand.

You spent 17 years teaching and researching at both secondary and tertiary levels. Tell us about the reverence you have for these seats of learning and what excites you about both learning and teaching?

I am by temperament and training a lifelong learner. My reading life started as a child. I divide my reading into two distinct parts: professional reading, (which I do during work hours, in the early evening and in at least one session on the weekend), and personal reading undertaken late at night for 40-60 minutes. My greatest pleasure in the world is to read with no outcome or agenda in mind.

I read both biographies and fiction – aiming, where possible, to alternate between English and French literature. Teaching for me is sharing knowledge. I instinctively teach even when and where I am not specifically called upon to do so.

Enthusiastic learners are often, I find, the most effective teachers.

Your role as Head of Modern Languages at Ascham School (1981-1986) changed almost overnight with the swing to Asian-centric education and commerce. I want to talk about the ‘trendiness’ of education – currently STEM and “essential” services are emphasised over arts and humanities.  Is there a danger in prioritising and valuing education primarily for its vocational ‘usefulness’?

The role of tertiary educational institutions has radically changed during my lifetime. Learning for learning’s sake now feels like an old fashioned concept. I believe that spending two years or more in the study of one (or several) humanities subjects such as literature, history, art history, archeology, comparative religion etc – creates an incomparably rich and nuanced world view.

Practical concerns, including anxieties regarding job availability, regarding opportunities for national and/or global mobility, relating to individual family obligations and to health and welfare issues, inter alia, clearly need to be factored into each individual’s education planning.

However, short of needing to earn immediate money for bare living, even a limited period of mind-expanding exploration of ideas without specific goals will, in my opinion, create the foundation for an enhanced life.

You launched Sherman Galleries (1986–2007) which was a critical and commercial success and showed your enduring ability to embrace change, adapt and innovate.  This was a huge learning curve in how to run a business, identify and manage artists, and build a strong client base. How do you compare academic learning to on-the-job erudition?

Finding my way into the gallery world was something of an accident for me. After almost six years managing what became nine modern language Ascham teachers, (whilst, of course, teaching French myself), I planned to leave.

Australia had pivoted to Asia and French had become a luxury subject embraced by a relatively small number of romantics. I embarked on an English-to-French book translation project and briefly worked part time in a sculpture gallery which I eventually took over.

I firmly believe that everything one learns provides a building block within the structure of an overall education – especially so if the learnt parts are connected in some way.

My 12 years in academic training played a huge role in the success of the gallery. Serious  artists are cultural observers and researchers. The ability to attract the best of the best was directly linked to my capacity and willingness to go deeply into the thinking underpinning their work, to read in tandem with their interests and to see significant exhibitions both at home and abroad.

In addition, and most importantly, I was fortunate in having William (Bill) Wright as Sherman Galleries’ inaugural curatorial director. Bill was an artist himself, married to an artist and much loved by his peers. He had turned to curatorial work, directing a Sydney Biennale and for a time had been Assistant Director at the Art Gallery of NSW. He mentored me on the artist side, whilst Brian my husband helped me set up properly managed business systems. We gave wonderful parties. The clients and collectors naturally followed.

Let’s talk about the Sherman Centre for Culture and Ideas (SCCI). The programming is compelling, highly immersive richly cultural and also academically enlightening.  Many of the sessions are free and, due to Covid, will be available online as virtual symposium. In era when tertiary education is privatised and most information sits behind a pay wall, you have found a way to democratise knowledge and make it accessible for anyone.  Is this a big driver for why you formed SCCI?

The Sherman Contemporary Art Foundation (SCAF) was my first post-commercial gallery, not-for-profit venture. The Sherman family personally funded the project for 10 years, during which time we commissioned 37 new, large scale projects across contemporary art, architecture, fashion, film and design. These grand installations were supported by a substantial series of accompanying scholarly catalogues, each painstakingly researched and visually compelling. A ‘Culture & Ideas’ suite of project-related talks was led by the legendary ABC broadcaster Margaret Throsby, journalist, author and TV personality Caroline Baum and myself.

In all its facets, SCAF was open and free to the public. However, family funding for the not-for-profit exhibiting Foundation was never intended to continue beyond the agreed-upon decade. When I considered my next pivot, the most obvious idea was to close the circle and develop a knowledge exchange forum, forgoing objects or exhibitions.

Hence SCCI, to which the Sherman family committed a more modest amount and for which I work to raise a relatively small portion of the annual budget.

Ticket sales represent a tiny portion of our income. Apart from family financial underpinning, our supporters to date have included several forward-thinking universities, a group of 20 private, dedicated contributors (whose modest Patrons Circle membership fees and ambassadorial roles are enormously helpful), The City of Sydney, an enlightened architectural firm and a culturally-focused development group.

In short, the family assumes financial responsibility for SCCI. Our fixed budget is expertly managed by senior SCCI team members and I work mainly on curating content, whilst persuading culturally conscious Australians and internationals to help support an endeavour that seems to give deep satisfaction to a variety of cross generational people from all walks of life.

In the process, I keep learning and maintain my lifelong knowledge-sharing work.

Finally, it was Malcolm X who said “Education is the passport to the future, for tomorrow belongs to those who prepare for it today.”.  What do you look forward to learning now for your future?

Lifelong learning, as a concept, clearly signals the idea of a continuum going forward in time…

I look forward to learning to live at a slower pace and to ageing gracefully. Preparing for decline is not an easy prospect and yet thoughtful planning often achieves best results.

If the very idea of learning as pleasure is successfully passed down to my beautiful grandchildren and to some of my students, my staff over the years and to the thousands of people who followed my endeavours – I will consider my job well done.