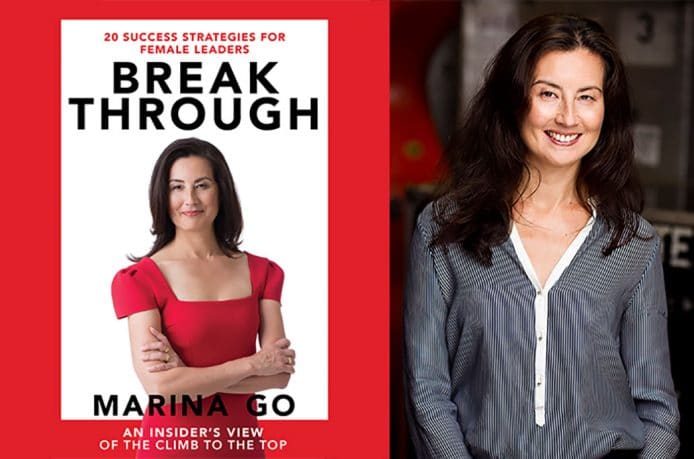 This publishing executive and board Chair has always kept an eye on the future, and the beacon at the top of the hill.

Back in 1989, within 3 years of starting as a journalist with News Limited, Marina Go was appointed Editor of Dolly magazine. After a highly successful five years at the helm, she continued her upward trajectory across leading mastheads and publishing companies, before being appointed General Manager, Magazines at Fairfax Media in 2001. While fitting in family and an MBA, Marina did not lose momentum, subsequently taking on significant Executive and Non-Executive Director roles until she was appointed General Manager for Hearst-Bauer Media in 2014. Since leaving Bauer, Marina has fulfilled numerous high-profile Chair positions (including Wests Tigers NRL club and Ovarian Cancer Australia) and NED positions (including Energy Australia, 7-Eleven and Autosports Group (ASX:ASG)).  During this time, she also authored a book Break Through: 20 Success Strategies for Female Leaders (Simon and Schuster) to inspire the next generation of female leaders to similarly find their path and run for the top.

We grabbed 10 minutes with the very busy Marina Go to ask about her impressive drive.

Marina, when you look back at what you have achieved in your career, what is the defining characteristic that allowed you to keep your momentum?  (vision, determination, energy?)

Planning. I am a mad planner and have always anticipated my next move. I always had a lot of ideas and so much that I wanted to achieve. I wouldn’t have been able to do everything that I have been able to do without planning. That same approach continues into my board career.

You have fulfilled an incredible array of different roles.  With such high-profile positions, you often don’t get the luxury of warming up into it.  What has been the best strategy for allowing you to hit the ground running in new roles and new environments?

Becoming a mother was also another (wonderful) interruption to your momentum.  How did you restart your career and summon even greater capacity to push forward with even more on your plate?

When I became a mother my career didn’t stop. I took six months maternity leave with my first child and four months with my second child. The first time around my then-employer dropped the glass ceiling on my head and that could have been the final resting place of my career, at the age of 28. But it actually made me more determined to succeed. I started a part-time MBA while I was pregnant with my second child and kept pursuing my goals.

You were first female Chair of the West Tigers NRL club and you are the current chair of Super Netball. If you were coach, and the team were exhausted and lacking motivation for the next quarter, what would your 3rd quarter pep talk sound like??

I would speak to them about the exhilaration they will feel when they achieve the outcome they have been working so hard for. Thinking about that lighthouse on the hill has always worked for me when I have been exhausted or frustrated.

You are a long-term champion of women in executive positions.  How important is it to have other advocates (and even opponents) from which to draw energy and strength from?

It’s important to surround yourself with people who are working towards similar goals so I enjoy spending time with women who support and elevate other women. That has always been important to me.

Marina, COVID-19 has thrown a spanner in many of our intended career and life arcs.  For you, it presented an opportunity to pull together a collective of women you worked with some 30 years ago at Dolly and launch an online mag for women over 45 (and 50 and 60). Tell us about Tonic Magazine and its birthing during lockdown.

Tonic is my little slice of joy. Before lockdown I had been catching up for lunch and coffee with a group of women that I had worked alongside during my Dolly days. We would ask each other questions about personal midlife-related issues, including relationships, skincare and menopause and it became clear to us that the content we were seeking didn’t exist in a form that respected our age group. So we decided to create what we were missing. The time that we gained during lockdown provided the opportunity to do all of the setup work required to launch a media brand. There are nine of us and because we once worked together so closely, albeit 30 years ago, we understand each other. We have received such great feedback from the women who have discovered our website.