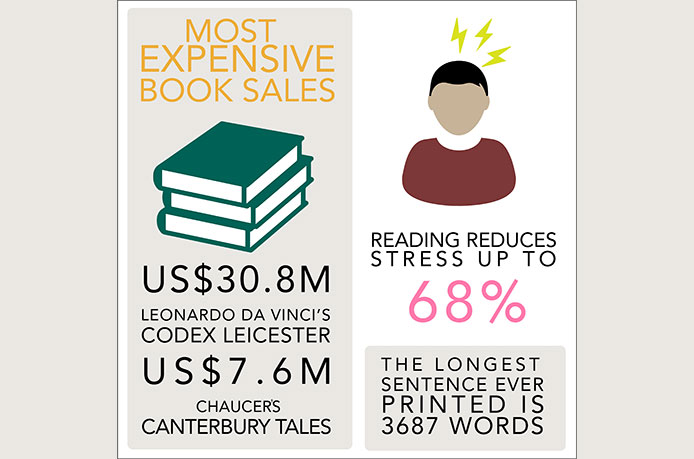 Australia is a nation of book lovers, with the average person reading for over six hours a week compared to the US, UK, Canada and Germany which all read below 5.8 hours a week. There are obvious reasons why we should read – we gain knowledge, it can reduce stress by 68%, and those who read daily are 2.5 times more likely to not develop Alzheimer’s. The majority of us have above average literacy skills, allowing us to access all the benefits that come with reading.

However, globally, 750 million adults are illiterate and cannot utilise this valuable tool. The reading habits of prominent figures are insightful. Gandhi was an avid reader, with a personal collection of 11,000 books. Oprah Winfrey credits books for giving her the “path to personal freedom.” Warren Buffett reads approximately six hours a day, Bill Gates reads 50 books a year, Theodore Roosevelt read at least one book a day, Elon Musk said, “I was raised by books.” And Mark Zuckerberg aims to read a book a fortnight.

For Barack Obama, reading was a tool to better understand the over 300 million population of the United States. And he sees passing on books to his daughters as a tool for empowerment. These powerful individuals have positioned themselves as advocates for reading, using their influence to engage and encourage their large audiences. They all share the books that changed their lives in interviews or on their own platforms.

Oprah Winfrey’s Book Club has encouraged millions to pick up a book (publishers estimate her influence to be anywhere between 20 to 100 times that of any other media personality).

Bill Gates provides reviews and articles on why reading is important on his blog Gates Notes.

Zuckerberg created a public Facebook group called A Year of Books to “emphasise learning about new cultures, beliefs, histories and technologies.” Books provide knowledge, new perspectives, a greater understanding of the world. And with that, accessibility to opportunities.

In a 2017 interview with Time magazine, Bill Gates stated, “Reading fuels a sense of curiosity about the world, which I think helped drive me forward in my career and in the work that I do now with my foundation.” UNESCO refers to literacy and education as a basic human right, yet within Australia, one in five adults are functionally illiterate. Contributing to that 20 per cent is a stark statistic – 46% of Aboriginal adults are functionally illiterate, and this reaches up to 70% in remote communities.

Jack Beetson, the founder of the Literacy for Life Foundation, an Aboriginal-led charity tackling low adult literacy rates, told ABC news in 2018, Indigenous literacy was a problem nationwide. He pointed out that “Everyday people with low literacy become further marginalised by everyday tasks” like filling out forms and reading prescriptions. Where there is access to books there is hope. Fifty years ago, almost one quarter of youth worldwide lacked basic literacy skills. The figure in 2016 was less than 10 percent. Closer to home, the 2018 NAPLAN (National Assessment Program – Literacy and Numeracy) Report showed some improvement in literacy rates nationally, including among Year 3 and 5 Indigenous students living in urban and metropolitan areas. However, there is still a massive discrepancy in literary skills – especially among Indigenous students living in remote and very remote parts of Australia. “Lack of access to books and other appropriate literacy resources continues to play a huge part,” the Indigenous Literacy Foundation noted. “Our work in aiming to raise literacy levels starts with making sure that every Australian child, no matter how remote their home, has easy and daily access to quality and culturally appropriate books.”