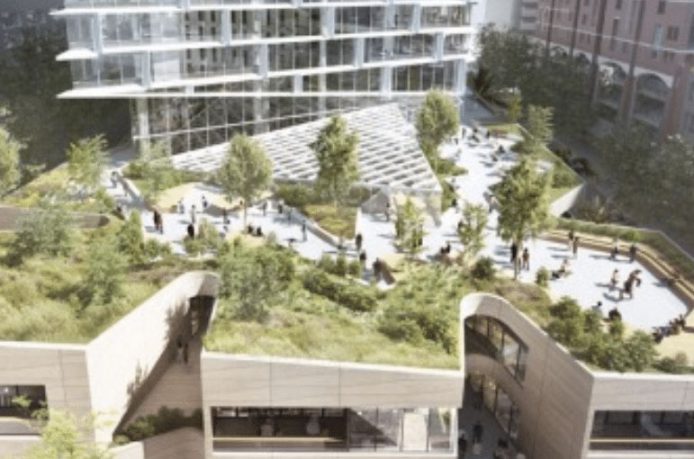 The future might be closer than we think, especially in architectural terms. Already under construction in Beijing is a complex of skyscrapers, office blocks and public spaces that should realise the most fantastical dreams of every sci-fi movie director and eight-year-old boy around the globe. From rotating skyscrapers to next-generation apartment design, we take a glimpse into the not-too-distant future of architecture.

360-degree View Israeli-Italian architect David Fisher proposed Dubai’s 360-degree rotating Dynamic Tower back in 2008 (see the much-viewed twirling render on YouTube), and its realisation is getting closer. Each of its 80 storeys will rotate individually around a concrete core and residents will be able to control rotation speeds and stop their apartment from spinning with voice commands. Back home, 3XN’s Quay Quarter Sydney skyscraper for AMP Capital in Circular Quay captures the essence of a rotating tower without the energy burnout, built as a stack of shifting glass volumes that rotate to every possible angle of Sydney Harbour.

Wooden Skyscrapers While it doesn’t sound futuristic, wooden buildings are a hot topic in the industry. Predictably, Scandinavia appears to have a stronghold on this niche, with C.F. Møller Architects and DinellJohansson having rendered the world’s tallest wooden skyscraper, planned for Stockholm in 2023. Tzannes in Sydney is the firm behind Barangaroo’s International House, the first commercial engineered timber building of its size and type in Australia and affectionately known as the Wooden Building.

Back to Nature Quay Quarter Sydney will also feature rooftop gardens atop those 49 storeys, as will more and more new skyscrapers because the green trend isn’t bucking. Moscow’s recently opened Zaryadye Park is the ultimate indoor park with four landscape typologies and integrating augmented micro-climates that will allow it to function throughout Russia’s extreme winters. In Germany, AZPA (Alejandro Zaera-Polo Arquitectura) is even attempting to soften the effects of a power plant by wrapping it in a corrugated skin of creepers, improving aesthetics and absorbing CO2 emissions.

Surreal Structures for Extreme Climates Acknowledging that nature is sometimes at loggerheads with urbanisation, a new guard of architects, urbanists and artists are exploring structures for hostile locations.  Artist Dionisio González became fascinated with the pattern of nature’s destruction (in the form of perpetual and catastrophic hurricanes) and human renewal observed on Dauphin Island in the Gulf of Mexico. Although the inhabitants were willing (or resigned) to live within the whim of nature’s cycle, Gonzalez fused the role of artist with that of architect, engineer and urban planner to concept design surreal structures that would better suit the fraught island’s populous, fusing fantasy with the inhabitants’ inevitable reality.  With global warming attributed to the freakish weather phenomena rocking the planet in 2018, creating all-weather structures and cities is likely to be something that demands our attention in future years.

Millennial Minds Millennials are known to have mastered the multi-task, and this will be reflected in new concepts of apartment living where space is both minimal and malleable. More and more millennials work from home now and they want a place that morphs from office to home in a moment, minus hallways and peripheral architectural add-ons. Patrik Schumacher of Zaha Hadid Architects recently made the controversial claim that millennials don’t even need a living room, just “hotel room-sized” pads to accommodate their round-the-clock networking.