The Business of (Aussie) Film 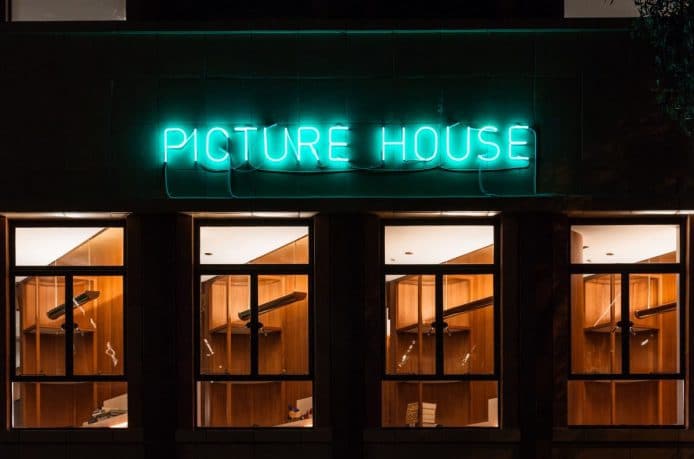 Once regarded as the “Hollywood Quarter,” Surry Hills’ Paramount House has a strong history and an ongoing connection to film.

Flanked by the original 20th Century Fox Sydney Office, the former Paramount Pictures Distribution Offices and Theatre (built in the 1940s) is one of the few surviving buildings recording the boom in Australian cinema development in the 1930s. It stands as a record for the importance of this area in supporting the film industry. It now hosts The Golden Age Bar and Cinema, leading film and TVC studio Heckler, underground multi-media broadcaster Vice, and The Office Space’s latest and most exclusive shared workplace location supporting a number of professionals in the film and production industry. As attested by these historic buildings, Australia has a rich and diverse history with the film industry.

Since Errol Flynn became a Hollywood movie star in the 1930s Australians have been garnering international recognition for their work at home and abroad. And not just in front of the camera.

Australian Directors, producers, set and costume designers, and score composures are gaining critical and commercial acclaim around the world. Such is the prevalence of the Aussie accent in Tinseltown, that they have been collectively coined “The Gumleaf Mafia.” The Australian invasion seems unstoppable, however there is a very real threat to the future of film, and indeed the Performing and Visual Arts in Australia.

On 13 May 2016 the Australia Council, the Australian Government’s arts funding and advisory body, announced $72.8 million in funding cuts for small to medium arts companies, sparking outcry across the creative industries and triggering a groundswell movement #istandwiththearts calling on government, industry and audiences to support a dynamic, growing and sustainable live performance industry in Australia. More specific to the film industry, the federal government’s cuts to Screen Australia’s budget announced last December amount to $51.5 million.

The Australian Screen Industry Group (ASIG) which consists of all the guilds, unions and associations that represent more than 10,000 Australian filmmakers are particularly alarmed by the government’s decision to use a portion of Screen Australia’s budget to supplement the tax offsets luring international production houses to shoot in Australia. Whilst foreign productions create jobs for Australian-based performers and crew this should not be at the expense of the local industry. The very real threat is that Australia will potentially lose home grown productions and talent to an overseas film and television industry. The Australian film industry had its auspicious beginnings with the 1906 production of The Story of the Kelly Gang, which has been inscribed on the UNESCO Memory of the World Register for being the world’s first full-length narrative feature film.

Since then, the Australian film history has been characterised as one of ‘boom and bust’ due to the unstable and cyclical nature of its industry; there have been deep troughs when few films were made for decades and high peaks when a glut of films reached the market. The 1910s was a “boom” period in Australian cinema. In this decade, Australia was one of the most prolific film-producing countries at the time. In all, between 1906 and 1928, 150 narrative feature films were made, of which almost 90 were made between 1910 and 1912. The, 94% of all films exhibited in Australia were coming from the US. Things remained quiet until the 1950’s when several notable films based on stories from Australian literature (A Town Like Alice, The Shiralee, Summer of the Seventeenth Doll and The Sundowners) were made in Australia and brought to prominence a new wave of Australian actors such as Peter Finch, Charles “Bud” Tingwell, and Chips Rafferty. Interestingly, given the current uproar over government funding cuts, it wasn’t until the advent of government support and funding for the arts in the 1970s and 80’s that the Australian film industry really took off.

In a narrative fit for a Hollywood movie, John Gorton became Prime Minister after following the disappearance of then Prime Minister Harold Holt in 1967 whilst swimming.  During his term, Gorton initiated several forms of government support for film and the arts, which was continued by the Gough Whitlam government. Initiatives included the establishment of the Experimental Film Fund, the Australian Film, Television and Radio School (AFTRS) and the Australian Film Development Corporation (AFDC – a federal film funding body).  These measures led to the resurgence of Australian film called the Australian New Wave, which lasted until the mid-late 1980s and are regarded by many as a ‘Golden Age’ of Australian cinema.

Successful films included Mad Max launching Mel Gibson to international fame, My Brilliant Career which was Judy Davis’ breakout role, and “Crocodile” Dundee doing the same for Paul Hogan.  The 70s also saw the emergence of film directing auteurs such as Gillian Armstrong, Phillip Noyce and Bruce Beresford. In the 1990s Australians really began to make a “cooee” in Hollywood. Mel Gibson starred in the Lethal Weapon movies and won an Oscar for Best Director for Braveheart. Australian producer Jan Chapman was nominated for The Piano which went on to win 3 of its 5 nominated awards. Lizzie Gardiner won an Oscar for Best Costume Design for Pricilla: Queen of the Desert (who can forget that gold American Express dress she wore to the ceremony!).

Babe received 6 nominations and a win for John Cox for his visual effects work, and Geoffrey Rush won the Best Actor Oscar (Australia’s first Actor to do so) for Shine in 1996.  As the 90s drew to a close, Australian actors including Cate Blanchett, Nicole Kidman, Rachel Griffiths and Toni Collette, began making regular appearances in the Oscar nominations. The 2000s were considered a gold rush for Australians in Film, leading them to be quipped the “Ozcars.” 2001 saw a record 13 Australians nominated, and three awards won.

Recent years have seen a new guard of Australian actors crack the big time, including Sam Worthington, Rose Byrne, Chris and Liam Hemsworth, Margot Robbie, and Rebel Wilson. As of 2016, a total of 43 awards from 154 nominations have been won by Australians.  And that’s just in film.  Australians are also dominating prime time American television.  Of the top five TV series set to air on NBC last year, three were headlined by Aussie actors, while no fewer than 15 different series — across both commercial and cable networks — also star actors from Down Under.

These small screen players include seasoned professionals Simon Baker (The Mentalist), Jesse Spencer (House) and Melissa George (Heartbreaker), and new comers Ruby Rose (Orange is the New Black), Sullivan Stapleton (Blind Spot), and Elizabeth Debicki (The Night Manager). “The Gumleaf Mafia” has successfully infiltrated “The Business” with a charming nonchalance and sterling work ethic. While the success on the big screen actors has been well chronicled, perhaps the bigger story is how Australian actors have joined their compatriots behind the camera, notably as directors and cinematographers, in creating one of the largest expatriate groups in the entertainment business. Against this backdrop of success it is significant that, on May 13 this year, 50% of small to medium arts companies did not receive funding as a result of the Coalition Government’s 2015 budget cuts to the Australia Council for the Arts. Some 65 arts organisations lost recurrent Australia Council funding after the arts funding agency was forced to cut its multi-year grants program back from six years to four years.

In the fall out, over 1,300 artists and arts workers are expected to lose their jobs, with small and mid-sized companies and organisations the hardest hit. These cuts will have flow on effects across Australia’s cultural industries, educational institutions and the commercial sector, including performing arts companies, venues, festivals and the commercial sector. Small to medium companies are a vital part of the live performance industry across our nation. They are innovators, they develop new and emerging talent, they provide jobs and career paths for talented Australians on and off the stage.

The Office Space is passionate about supporting businesses. We also proudly support artistic endeavours and cultural experiences.  For this reason we Stand With The Arts, and believe in increasing the support to Australia’s vibrant arts and cultural scene. The Arts – whether film, literature or visual art – are critical to our identity as individuals and a society, helping us to interpret the past, make sense of the present, and explore the future. Beyond the cultural richness that film, performing arts, fine arts and writing represents, there is a real business imperative to support the arts. In Australia, the creative industries generate $50 billion per year towards the Australian economy. The arts sector employs more people than agriculture, construction or mining. As a business that celebrates art, design and culture in our workplaces, and as a business that actively supports small and medium businesses to grow and flourish, we Stand With The Arts as an essential service, not a luxury or an add on.

We fully back the rising call for the Federal Government to return the $72.8 million in funding to the Australia Council and the $50.1 million to Screen Australia so that we can continue to support a dynamic, growing and sustainable performance industry in Australia. We call for the arts to be accessible to all Australians. Household names like Nicole, Hugh, Cate and Russell perpetuate the profile of Australia and indeed Australian’s to the world and do more than any tourism or PR campaign could achieve.  And these actors are but the tip of the industry iceberg that supports a rich ecosystem of actors, script writers, directors, producers, set and costume designers and production crew.

So stand with us for the arts to support and perpetuate the legacy of the Australian Film Industry.

Header: Priscilla Queen of the Desert