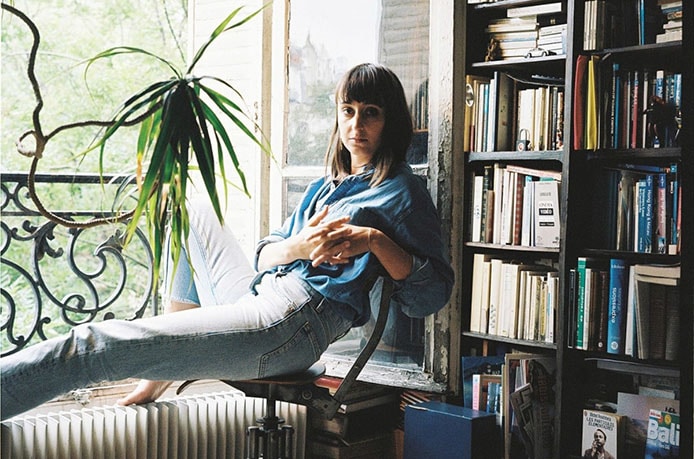 Enigmatic and nomadic artist Stanislava Pinchuk (A.K.A Miso) is a woman of many talents and many places.  Impossible to pigeonhole, her broad practice sees her draw on her skills as artist, tattooist, illustrator, curator, photographer, film maker, writer, publisher, sculptor, beekeeper and DJ. Impossible to pin down, she moves between Tokyo, Sarajevo, Paris, Melbourne and Tangier. Pinchuk’s arresting work has seen her recognised on the prestigious Forbes 30 Under 30 (2018), her artistry has been commissioned by high-profile clients including Chanel, Gucci, Tiffany & Co., Nike and Qantas, and her coveted money-can’t-buy “jail tats” have adorned many a friend and artist including Florence Welsh, Sam Smith, and Del Kathryn Barton. Pinchuk is perhaps best known for mapping human migratory patterns within conflict zones and using the data gleaned to produce exquisite tapestries of pin-prick dots on paper. But her own life is equally fascinating to map. Born in Kharkov, then USSR, now Ukraine in 1988, Pinchuk and her family immigrated to Melbourne when she was 10.

By 14 she was participating within Melbourne’s vibrant street art scene under the pseudonym Miso. Entirely self-taught, her work in the popular touring exhibition ‘Space Invaders’ caught the attention of The National Gallery of Australia and they acquired two large-scale cut-paper diptychs, and another two of her elaborate pin-prick works three years later. Pinchuk graduated from the University of Melbourne in 2011 with a Bachelor of Arts and double major in Art History and Philosophy. Since then she has been traversing the globe mapping the Russia-Ukraine war in 2014, the Fukushima & Chernobyl Nuclear Exclusion Zones, the Calais ‘Jungle’ Migrant Camp, and the oil fires set by ISIS in the Al-Qyaarah region of Iraq. Her work has featured in numerous solo exhibitions across the country and has earned her residencies around the world.

In 2019 Pinchuk made her curatorial debut with “Documenting the Body” for Museums Victoria at the Immigration Museum and this month she will reveal a new photographic work The Red Carpet, in conjunction with a lecture titled The Thread of War at the All About Women festival at the Sydney Opera House. We sat down with Stanislava to talk about her body of work, join the dots and float the danger of a good idea.

NT: Your traditional tattoo practice, your pin hole works rendered dot by dot with etching burin and mallet, even the perforated uniting papers you use in bee keeping all rely on making a mark. What is the power of a puncture in your world?

SP: I suppose when we think about any mark-making… it’s just systems of lines and dots. That’s all it is – which is so beautiful. So somehow, it really seems very simple for me – lines making a dot! But I really do love drawing with negative space – not putting a medium onto paper, but chipping back at it, like a piece of marble – to reveal something in the absence.

NT: Your data mapping work is mesmerising and ethereal, but it carries heavy and traumatic themes of displacement and loss.  With deep reverence for the subject matter, your work transfers pain into something beautiful and meaningful. What is the personal toll in creating these works?

SP: It’s a huge one – in a lot of ways. The research, the mapping, working on the ground – are huge undertakings. Physically, emotionally, financially, logistically, spiritually. All of my projects and exhibitions are done independently – funded from my own pocket, so it’s a huge process in every way. The labour of making the drawings is also a very extreme physical pain. It’s strange – half meditation, half extreme duress. It takes a lot of capacity. But I think this also holds a very big tension – and a tension that’s present in a lot of what’s historically considered ‘women’s work’ – like lacemaking, sewing, embroidery. They are incredibly physically demanding and painful processes, in the pursuit of something that looks beautiful and effortless. I think it’s an incredibly powerful history, and a medium that so many women could use to document experiences and perspectives of conflict.

NT: There is sedition, sorrow, and even serenity in how your pin-prick mapping of traumatic world events reveal something kinetic and delicate.  And your terrazzo sculptures of debris crushed underfoot within the Calais jungle migrant camp are both arresting and disturbing. Your work is a wonderful paradox of demure and dangerous, rebellious and reverent. Could that also describe and reflect you as a person?

SP: Thank you! I think so. Half visceral, half cerebral – that’s what I always think. But I really do love working to beauty, and strongly feel that I want to leave beautiful things in this world, after I die. And I think beauty is such a strong language to speak through, that cuts through to people in a very direct way – that can also reveal something very difficult on closer inspection. It’s like a double bluff, pull in – then unfold.

NT: You have worked with – and count as dear friends – fierce and progressive female creatives. And of course, thinking of your work documenting the traditional women’s tattooing in central Bosnia & Herzegovina. Across the beautiful fluidity of the female whole, is there one central power that you believe unites us all?

SP: When I started tattooing 10 years ago, if you told me, I would have never believed that there would be any difference in tattooing men or women. Ten years later, I can’t tell you how profoundly great women’s capacity is for pain, resilience and patience. If there is anything – I would say it’s that – eternal strength through divine time.

NT: This month our theme is Dangerous Women.  What makes a woman dangerous?

SP: What makes a woman dangerous is any resistance to this world, that has been inherently built to be against her.

NT: Nietzsche once said “The essence of all beautiful art, all great art, is gratitude.” What are you grateful for?

NT: Finally, what can you tell us about your new work, The Red Carpet, ahead of its unveiling on the 6th March?

SP: It’s so hard to talk about a new work, let alone before the big release! And it’s so frustrating and exciting, because the images are all ready, sitting right next to me as I type! But basically, The Red Carpet is an architectural intervention and performance work, covering the steps of the Sydney Opera House with a Ukrainian Bessarabian rug. Within its ornamental design, the carpet contains a data-map of the damaged topography of Kiev’s Maidan square protests – which marked the beginning of Ukraine’s illegal invasion, annexation and ongoing civil war. Which is of course, my home. So, for me, the work references histories of women documenting personal experiences of conflict through textiles. In a way, the intervention becomes a literal red carpet for the Sydney Opera House – acknowledging women’s domestic interiors as the foundation leading to ‘starchitecture.’ It’s been a huge two years, of production – epic highs and lows. It’s been a two woman project, with my epic, patient curator and co-producer – Grace Partridge from Antidote Projects. We’ve learnt so much, and I can’t wait to be on the other side of this together. I can’t believe this is the week of the launch.

Don’t miss the work of Stanislava Pinchuk in two major exhibitions this year:

March 8, 2020: New photographic work The Red Carpet will be unveiled in conjunction with a lecture titled The Thread of War at the All About Women festival at the Sydney Opera House. Curated and co-produced by Antidote Projects.

June 27, 2020: Survey show of Stanislava’s most powerful data projects from the past five years at Heide Museum of Modern Art in Melbourne. She has also just published an exquisite and highly tactile book “Borders” in collaboration with La Chambre Graphique Paris. Get your copy here.

For more information head to the brand new site: stanislavapinchuk.com