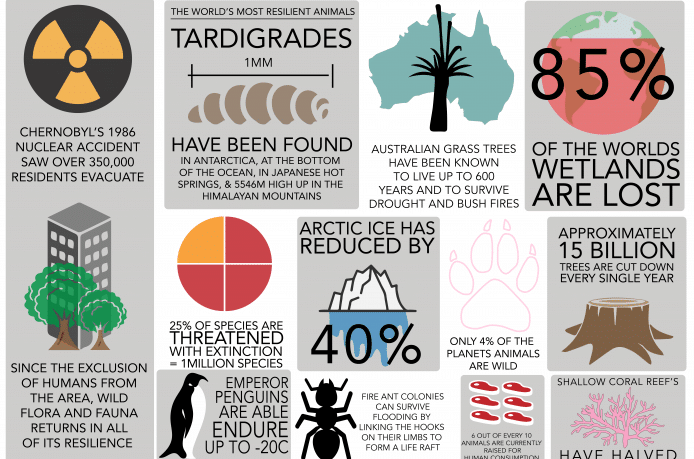 Animals and plants have tremendous resilience in the event of a disaster. David Attenborough’s recent documentary A Life on Earth released last month, begins with footage of the present state of Chernobyl, Ukraine…Thirty-four years on from the devastating 1986 nuclear accident that saw over 350,000 residents evacuate, the creation of an exclusion zone, and severe restrictions on permanent human settlement still in place today. Humans can no longer inhabit the city, and as a result, wild nature returns in all its resilience to reclaim. Brown bears, bison, wolves, lynxes, horses and more than 200 bird species now inhabit the city.[i]

Nature has a resilience to withstand and adjust in order to survive.

Tardigrades, also known as water bears, are probably the most resilient species on earth, able to withstand radiation, being heated to 150 degrees Celsius and being frozen. Usually no longer than 1mm, this small fauna has been found in Antarctica, the bottom of the ocean, in Japanese hot springs and 5546m high in the Himalayan mountains. In 2007 thousands of tardigrades were attached to a satellite blasted into space, and when returned, many of the tardigrades were found alive, with newly hatched healthy young.[ii]

Nature’s capacity for survival in events of natural disaster were seen during the 2017 floods from Hurricane Harvey in Texas. Fire ants were found building life rafts to support their colonies.[iii] Flooding drives the ants out of their nests and within minutes, thousands link together using hooks on their limbs, and float for weeks without drowning[iv]. To preserve the future of the colony, worker ants carry larvae and the queen to the top of the ‘raft’ to keep dry.[v]

Australian native plants have adapted to challenging conditions. Australian grass trees (Xanthorrea) are spectacularly resilient, some species living for up to 600 years and surviving both bushfires and drought. They don’t shed their old leaves, but pack them tightly around their stem, bounded by a water-proof resin. Though the substance is flammable, it also shields the stems from heat, and allows them to survive a fire.[vii]

Mangrove forests are some of the toughest places on earth, with a capacity to face extraordinary levels of stress and disturbances.[viii] The dense root systems trap sediments that flow down rivers and off the lands. This helps to stabilise the coastline and prevent damage from waves and storms. Mangroves’ resilience provides protection along our coasts for both human life and marine life. Areas that have had mangrove forests cleared have noted damage from typhoons and hurricanes as much more severe.[ix] However, 17% of Australia’s mangroves have been lost since settlement. And over the last 50 years almost one-third of the world’s mangrove forests have been lost. [x]

Attenborough’s aim to return the wild in order to restore biodiversity will depend on the resilience of organisms and their ability to compete with climate change and human population growth.

Human pressures on our planet have arguably coincided with the industrial revolution which propelled civilisations to expand geographically and economically. This has resulted in changes in land and sea use, direct exploitation of organisms, climate change, pollution, and invasion of alien species. Indirect drivers of these changes have been identified as societal values and behaviours that include production and consumption patterns, human population dynamics and trends, trade, technological innovations, and governance from local to global.[xi] In the past 50 years, global population has doubled, the economy has grown nearly fourfold, and trade tenfold, which has exponentially increased the demand on energy and material provided by nature.[xii] Attenborough highlights the significant impact of humans simce the 1950s. Animal populations have more than halved; 70% of birds are domestic, with almost 24 billion being chickens; 60% of animals are raised for food consumption, with only 4% accounting for wild animals; we cut down up to 15 billion trees per year; 30% of fish are being fished to critical levels; freshwater populations have declined by over 80%; shallow coral reefs have halved; the arctic ice has reduced by 40% in forty years; and a century ago Costa Rica was three-quarters forest… today it covers only one quarter.

The Intergovernmental Science Policy Platform on Biodiversity and Ecosystem Services (IPBES) 2019 report has produced statistics revealing our significant reliance on nature and its essentiality for human existence. More than two billion people rely on wood fuel to meet their energy needs. An estimated four billion people primarily rely on natural medicines for their healthcare. 70% of drugs used for cancer are natural or are synthetic products inspired by nature. 75% of global food crops for human consumption rely on animal pollination. 60% of human influenced carbon emissions rely on nature’s carbon sequestration. In addition, we have destroyed our coastal protection such as coastal habitats and coral reefs, which increases the risk of floods and hurricanes. We rely on nature, its ecosystems and biodiversity, yet our destruction is exponentially increasing.

The IPBES report goes on to list statistics of the deterioration of nature by human influences. 65% of land surfaces have been significantly altered, with one-third of land use designated to agriculture. Over 85% of wetlands have been lost. Half the live coral cover has been lost since the 1870s. Since 1900 the average abundance of native species has fallen by 20%. Marine plastic pollution has increased tenfold since 1980, which has affected at least 267 species. That includes 86% of marine turtles, 44% of seabirds, and 43% of marine mammals. Nearly one-fifth of the earth’s surface is at risk of plant and animal invasions – which impact native and endemic ecosystems. An average of 25% of species are threatened with extinction – this is approximately 1 million species. As we lose species, the rate of extinction exponentially increases.

The CSIRO have identified five core values that humans place on biodiversity: economic, ecological life support, recreation, cultural, and scientific. All values illustrate the importance of biodiversity for human life.[xiii]

As Attenborough calls for the stability of the planet’s biodiversity, he reminds us that every part of nature plays a role in keeping each other from extinction. In Attenborough’s 2020 BBC series Extinction: The Facts, Kathy Wills, professor of biodiversity at Oxford University acknowledges the flaw in our cultural perception of biodiversity. “We tend to think we are somehow outside of it,” says Wills, “But we are part of it; and totally reliant upon it.”[xiv]

Ecological resilience is part of the restoration of biodiversity. In Australia, resilience is a key underpinning principle of our Biodiversity Conservations Strategy 2010-2030.[xv]

WHAT IS ECOLOGICAL RESILIENCE?

Ecological resilience is the ability of ecosystems to resist permanent structural change and maintain ecosystem functions. Permanent structural change can come from disturbances such as floods and hurricanes, as well as human influences such as over-fishing. According to Australia’s State of the Environment 2016 report, in the present context of global climate change, ecosystems are likely to be exposed to an increase in disturbances. These disturbances will also impact the resilient capacities of organisms.

Attenborough’s solutions for biodiversity management strategies include a return of the wild; switching to a plant-based diet; halting deforestation; raising the standard of education and healthcare globally; creating no-fish zones; and change farming practices to use less land.[xvi] We need to assist nature to restore itself. We need to work with our wildlife in using their resilient properties to adjust to climate change and population growth.[xvii]