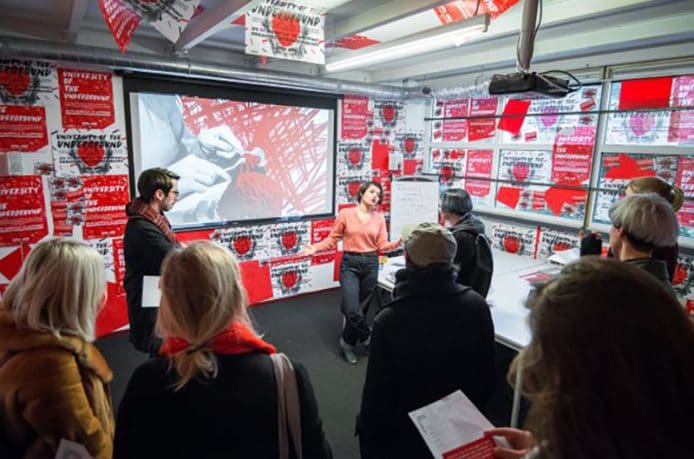 Established by the French filmmaker and experiential design extraordinaire, Dr Nelly Ben Hayoun-Stépanian, the University of the Underground aims to support pluralistic thinking in leadership by offering free education to the next generation of activists. Alongside board members like Noam Chomsky and Nadya Tolokonnikova of Pussy Riot, the University “actively questions the commodities of knowledge, power and politics.”

In 2014, Icon magazine recognized Nelly Ben Hayoun-Stépanian, who is of Algerian and Armenian descent, as one of the top 50 designers ‘shaping the future’. Her flair for activism, and experiential practices that foster critical thinking has made her an ideal candidate for inspiring a new cohort of thinkers.

Now Head of Programme of the University of the Underground, Nelly Ben Hayoun-Stépanian, has been dubbed the Willy Wonka of design experiences. At Nelly Ben Hayoun Studios, she has collaborated with the likes of NASA (with whom she created the International Space Orchestra, the world’s first orchestra of space scientists), Google HQ, Mattel HQ and Nike. We spoke with Nelly about U of U and her take on the education changes that are being fervently debated in Australia.

One of the University of the Underground’s three tenets is a Pluralistic Education, encouraging a multidisciplinary program and unconventional research practices. Why do you think it is so essential to encourage lateral/divergent thinking in our leaders of tomorrow?

Plurality, when I used it, is in line with the philosophy of people like Arendt say. The reasons why it is so essential to make it a part of any learning processes is that it breaks away from binary or authoritarian thinking. It allows you to think beyond existing colonial framework; ideologies and so forth. It is not one rules it all, it is actually how can I make sure that as many voices are being represented and how can I rethink my models in order to achieve that. In the case of politics and in general reaction to politics we often use that figure of the monster- the good and the bad. Leaders and medias spend time to organize battles between  two main figures. This is never as simple as black and white and it is our mission to see things more in their circularity through time or seasons and all its complexities- thus we support unconventional research practices as they are often the ones breaking new innovative grounds while not being recognized or highlighted by mainstream academia or industries (ie: Indigeneous studies, afrofuturism, arabfuturism etc….).

In the case of Hannah Arendt, plurality also meant staying away from ideologies such as nazism or fascism and rethinking institutions so that they can best support critical thinking within them in order to avoid the reminiscence of totalitarianism.

In Australia we are confronting the threat of university privatisation and ever-increasing university fees (in June the Federal Government announced they will double the university fees for some arts courses). As someone who feels so strongly about the importance of free education, can you tell us a little about the role of deinstutionalised learning environments?

I think there are a few layers to your question. One is on governmental politics and the rise of fees as decided by the government, one about the importance of freedom of learning and importance of access to free education but also alternative educational formats and one about institutions and their roles in learning?

‘De- institutionalizing’ is another beast in itself- as that is more of a process or a method of inquisition as to proposing a new structural model for societies to organize and perhaps reconnect or acknowledge their past (in the same manner as decolonizing research practices and learning).

To some extent this is the main issue I think, that we do not layout issues and problematics in ways and means that we can actually make sense of them and therefore modify them and enact them.

A big part of what we do at the tuition free charity- the University of the Underground- is to teach students and researchers how to understand the power dynamics within institutions in order to understand the various layers that affect the decision making processes- being economics, political, historical and so forth. That is truly a plurisdiciplinary and pluralistic investigation as a result of that unraveling process- but also we render visible complexities inherent to these layers and the way they are being dealt with within these power dynamics. If you want to prove why change is needed you therefore need to first understand the politics which shaped such and such production- being learning curriculum or other.

For me- on a personal level- I believe in line with political theorist such as Hannah Arendt for example; that education should happen outside of governmental politics, independently from government, in the form of a federation of alternative educational platforms. I don’t believe that education should be only a governmental matter, I believe it is a citizen one- that everyone of us has to support learning. The idea that a government can take decisions on behalf of citizens for me does not make sense as I am all about pluralistic thinking and not taking shortcuts in the development of cooperative and federation of ideas.

Now what I am also saying- between the lines here- is that the democratic models we are using being in Australia or USA or Europe are clearly showcasing their limits and it is time for new political frameworks to appear away from Nation-states and the capitalist economic format which rules it.

At the University of the Underground, we are set as a charity but indeed- the plan in the upcoming years is to build a cooperative and federation of alternative educational models, some free, some not- depending on the visions of each programmes. For us, at the University of the Underground we believe in free education as we believe that if education is free students are more able to consider experimental new routes for themselves during their studies and after their studies. But that is not proven and it is a belief that might be challenged in the coming years.

An essential aspect of the University of the Underground is rethinking education beyond national borders, building a “federation of cooperative schools globally to support the development, identification and empowerments of countercultures in institutions”. Part of this process has been creating ties with institutions across the globe, where students have collaborated with the American University in Cairo, and Tbilisi in Georgia.

The universities MA accredited Masters Design of Experiences “exists at the nexus between critical design, experiential, theatrical, operatic, filmic, semiotic and musical practices” equipping students with the tools to shift modes of thinking on a governmental scale. You can check out the work of some of the first cohort of Masters students (2017-2019) here.

In 2019, the University of the Underground launched High School of the Underground, a new project-based after school program for young creatives in Amsterdam. Learning from professional designers from around the world, HS of the U provides a space for young people to push their creativity to its limits, with eclectic projects ranging from music production, theatre, dance, visual design, film or storytelling.